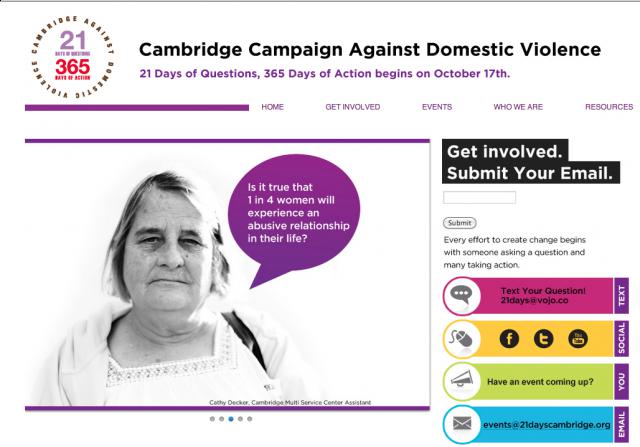 I have decided to change my final project topic once more. While I am excited by both the history of civic media in Boston’s Chinatown and James Rojas’ participatory planning workshops, I am now going to focus my final project around the 21 Days Question Campaign Against Domestic Violence in Cambridge.  The City of Cambridge approached the organization Engage the Power (EtP) to help design a campaign against domestic violence.  EtP helps communities set political agendas by designing “question campaigns.”  Engage the Power believes in the power of the question to hold decision-makers accountable, as well as to help facilitate knowledge exchange and collective action.  The organization was founded by MIT DUSP Professor Ceasar McDowell.

Starting on October 17th, Cambridge residents, workers, community members, and other stakeholders will submit questions via social media about domestic violence.  Vojo is the online platform that collects the questions through email, text message, voice recordings, etc.  Through beautifully designed posters, digital marketing, and other forms of communication, people in Cambridge will be encouraged to think about domestic violence issues harder and ask questions.  Over 18 organizations including the MIT Center for Civic Media are involved in pushing this question campaign.  Questions already submitted include:

After questions are collected, for the following 365 days, the City of Cambridge along with other community partners working to fight domestic violence will code the submissions by themes, and those themes will inform action plans around the questions.

I am still brainstorming a final deliverable for this course as I get involved in the project, but ultimately I will learn to use vojo and help curate the content as the final questions trickle into vojo.  Two years ago, I was enrolled in Ceasar’s course Public Participation in the Digital Age and it was then when I first learned about the question campaign concept.  At that time, the question campaign was more of an open idea and forum and not employed for specific cause.  Question campaigns had been launched in several other cities, but the topic was completely open.  The 21 Days Against Domestic Violence Question Campaign in Cambridge is a brilliant idea in my opinion.  Last week, I blogged about efforts that cities were making to engage residents and questioned what actually happened with the content collected and wondered if those efforts really made a different to policies, program, and etc.  This campaign however responds directly to questions that constituents ask by connecting them to one another, which in turn sets an agenda created by the entire Cambridge community.  It’s a great model for community problem-solving and could be implemented for a variety of causes.

What do you all think would be an interesting way of reflecting on the content collected from the campaign as a final project?