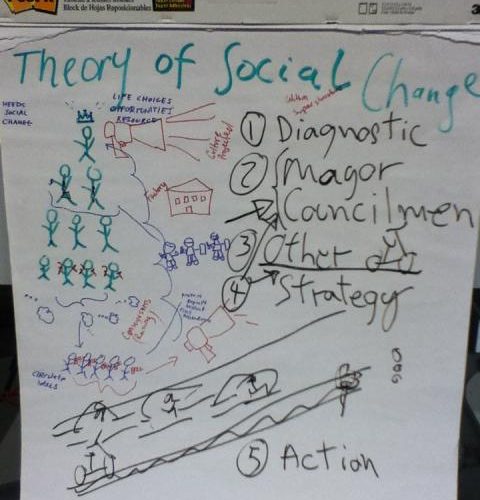 Last class, my group designed two “theory of social change” diagrams. One diagram demonstrated the process an individual goes through when trying to improve or modify his or her environment. It assumed that the sociopolitical surroundings of that individual allowed for a simple and accessible democratic process and that local politicians and stakeholders act in the interest of the individual. In that process, the individual first assesses the surroundings and decides what about status quo needs to change. Next, the individual takes this concern or idea to a local politician, and engages others in the community around the issue, encouraging them to also reach out to local politicians. Together all stakeholders form a strategy and take action.

The second diagram assumes a more oppressive sociopolitical environment with a great deal of social stratification and hierarchies of power. In that model – inspired by Marxist theory – we show how the most oppressed portion of society share ideas for change first among themselves, and eventually band together to form a movement. They communicate their message through several formats (depending on the cultural context), and collect more support through the social pyramid for their causes. If the top of the social pyramid does not listen to the voices and requests of the movement, then the group may have to resort to more extreme strategies such as boycotts, protests, civil disobedience, or violence.

As I reflect on these two models, I think what is MOST important to spur social change is the power of the narrative. Change starts with a story because it is stories that allow people to connect, empathize, relate, and understand why change is needed. The first step to social change is to identify compelling stories humanizing the cause and the second step is to use those stories to bring people together to form a movement. Then the movement must blast those stories through whatever platforms are accessible and most influential. As mentioned above, this is of course dependent on cultural context. In class, we focus more on technological and Internet platforms, but depending on the place, print media could also be important.

However, social mobilization and movements are a lot of work and require a lot of strength and momentum to actually achieve the intended goals. Thus, movements are not formed around all things that require social change, and fortunately at least in the U.S., governments realize this and are increasingly trying to figure out how to engage residents. In my work, I am committed to the idea of participatory planning processes because I believe that such processes allow meaningful stories to emerge. I think about participatory technology/art projects that were designed by local governments, interactive agencies or artists to help residents and constituents spur social change. These projects include Chicago’s Give A Minute, New Orleans’ Neighborland, New York City’s Change by Us, among others. The projects provide platforms for people to share their stories and share what they believe needs to improve or change. The idea is that if constituents are given a space to share their perspective and story, then those with decision-making powers will be better informed about who they serve and how to serve them. But, I am left wondering, do such initiatives work? Is participation meaningful? Are the stories that emerge actually powerful? How do decision-making authorities use the information? Does social change happen?