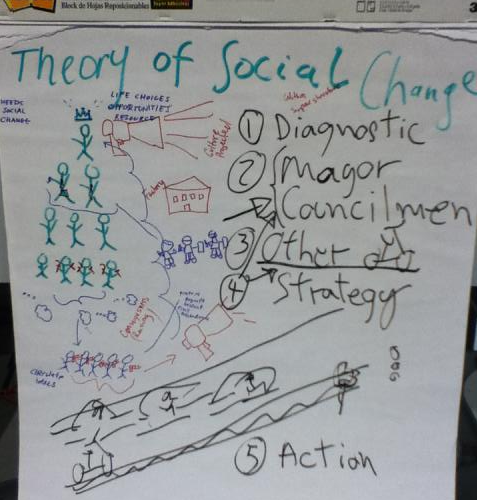 Last Wednesday, our group began to formulate a theory of social change. Instead of having a single theory, however, our group divulged into two camps on what an idealized model would be like. Today, I would like to discuss the model that I had personally worked on more, and that would be the colored “human pyramid” in the picture below. We wanted to draw a model and demonstrated the current state of society, which can be broadly described as a pyramid. I believe that societal change cannot and should not warrant a “flat world”, with one of absolute equality. However, societal change should bring about various shifts in the societal pyramid, for the greater benefit of the less-endowed masses.

Our pyramid is headed by a single figure on the top, who carries a massive megaphone and wears a single crown upon his forehead. He represents the various leaders of the world. Many opportunities and resources are available to the top tier, who reigns upon everyone else with the giant megaphone. Below the monolithic figure lies a couple of men in suits. These businessmen own the factories and corporations of the world. They carry ties to symbolize their power and cash to demonstrate their wealth. With the crowned leader and businessmen at the top, clearly the current situation demands social change.

The bottom two tiers of the pyramid are generally in the same social group: the middle and working classes. While the former carries no items to demonstrate their “normal” nature, the latter wields hammers and sickles to symbolize the working class. These disenfranchised people demand social change and justice, but their various protests are literally and technologically blocked by various censored, represented by the blue-uniformed riot police. They form a physical and cyber- wall to prevent upheaval for the businessmen and leaders of the pyramid. However, we see a growing group of the truly discontent grow underneath the current societal pyramid. These men and women are formed mostly from the members of the bottom two tiers on the pyramid. Individually, they all carry tiny megaphones that would normally not be heard by the masses. But when the aggregate voices of the protesters are combined, they form a massive megaphone that carries a voice rivaling that of the leader, sitting on top of the pyramid.

In my final project proposal, I aim to educate the masses on various important issues. A primary reason why the protesters in the pyramid do not completely overpower the top two tiers is simply because the former is too few in number. I plan to have numerous videos become dedicated to teaching others of important societal issues. A primary objective of my videos is to reach out to those two would not normally be interested in the taught subject matters. Thus, if my humorous/educational videos were to exist, they would be able to recruit a wide number of protesters that would normally not be interested in fighting for societal change. My final project proposal does not directly influence the societal pyramid model of social change, but it does influence it by creating a much stronger pool of protesters that would be able to accelerate the rate of social change.