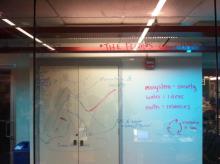 At the end of our last Intro to Civic Media class, we split up into groups to develop models of theory of change. And for the second time doing this type of activity in this class, I was in the group that came up with a reference to nature — this time, we modeled change with… the water cycle.

And since water cycles remind me of one of my favorite childhood books — The Magic School Bus At the Waterworks —, I’m going to describe a method of change and how it relates to my semester-long project through The Magic School Bus (by Joanna Cole — oh wait, I mean Joanna Kao).

Ms. Frizzle seemed a little different the other day. She’s normally a little different, but that day, she was even more different. When she walked into the classroom, she didn’t say her normal “Good morning, class!” and “Are you ready to learn about…” Instead, she just walked to her desk and stared off into space.

No one knew what to say at first. Arnold was silently relieved and content with just sitting in silence, thinking that he wouldn’t have to go through one of Ms. Frizzle’s field trips for the day. But Wanda finally broke the silence.

“I just talked to our principal today, and it looks like our school is going through some budget cuts,” Ms. Frizzle said with a sigh. “I’m just trying to think of ways to convince our school board at this afternoon’s meeting to continue our funding.”

“At my old school, we held up signs outside and had people sign a petition,” said Phoebe.

Everyone went to the supply closet, got our their art supplies, and started making signs. Thirty minutes later, they were outside and holding their signs up. A few hours later, only a dozen cars had driven by, and only a few had bothered to sign their petition.

“Is it just me, or is no one coming by?” asked Ralphie.

“According to my research, more people get information online than from students holding signs on the street,” said Dorothy Ann.

“Good observation, Dorothy Ann,” said Ms. Frizzle. A moment later, Ms. Frizzle got a twinkle in her eye. Arnold started to groan at the familiar sight. And just seconds later, Ms. Frizzle looked up at her class and said, “To incite change, we need to change! Time for a field trip!”

“Not again!” Arnold said under his breath.

The bus drove itself over to the group, and everyone piled in.

“Where are we going? I have a feeling that we’re not just going to a protest,” said Arnold, already getting queasy about the thought of a protest.

“Seatbelts, everyone!” Ms. Frizzle replied as the bus warped and shrunk to a miniscule size, flew into their classroom window, and popped through a computer screen.

“I knew I should’ve stayed home today,” said Arnold, as he watched 1s and 0s fly quickly by the bus.

The bus navigated the information highway for just a few more seconds before landing on a screen with a big bird.

“Where are we?” said Ralphie.

“We are in the Twitterverse,” said Ms. Frizzle. “You can use 140 characters to spread messages to your followers.”

“So we can tweet out a link to our petition online!” said Tim.

“But we still have one problem. According to my research, we have no followers,” said Dorothy Ann.

“Check this out,” said Tim. “The post that just flew right by us was written by Hilary Duff, and it was retweeted 302 times! Too bad we don’t have as many followers as Hilary Duff.”

“As I always say, if you don’t have enough, piggy back off Hilary Duff!” said Ms. Frizzle.

“So you’re saying that if we want more people to see our post about saving our school, we should comment on that post!” said Dorothy Ann.

“I couldn’t have said it better myself!” said Ms. Frizzle.

“Don’t you mean, do your Duff?” said Carlos.

“CARLOS!” The class rolled their eyes as the bus arranged a tweet about saving their school and pushed the tweet button to reply.

“I hope this works,” said Arnold who was starting to feel a little sick from the 1’s and 0’s whizzing by.

A few minutes later, Ms. Frizzle looked down at her phone and saw a calendar alert — “School board meeting: in 5 minutes.”

“Class! We have to leave now so we can present to the school board in 5 minutes,” said Ms. Frizzle.

Everyone got into the bus and Ms. Frizzle pushed the eject button. It wouldn’t start.

“It looks like our bus’s eject button has jammed and will need some rest,” Ms. Frizzle said with a sigh.

“According to my research, the school board is going to show this Youtube video during the meeting today,” said Dorothy Ann, pointing to a link she had written down in her notebook. “If we can’t be there in person, why don’t we comment on the video like we did on Hilary Duff’s tweet?”

The bus lurched forward and started running towards another screen. A few seconds later, the bus screeched to a halt on a page with a video and began dropping in the petition link with some accompanying text.

“Phew!” said Wanda. “Hopefully they’ll get to see our petition even if we can’t be there in person!”

“Can we get out of here yet?” asked Arnold.

Ms. Frizzle tried the eject button again, and this time, the bus reacted. The bus zoomed through a slew of 1s and 0s and finally popped out of the computer screen, out the window, and grew back to normal size in the parking lot.

Everyone walked back into the building, and Ms. Frizzle led them into the school board meeting room.

“Ah hello, Valerie,” said Principal Ruhle when he saw Ms. Frizzle and her class. “We were just looking at your petition.”

“You got a very large number of signatures in a very short time,” said Principal Ruhle. “And because of the strong reactions to the budget cuts, we’ve decided to maintain your funds at the same level this year.”

“As my great uncle Barnard used to say, “Well-placed words on large display can take you quite a long, long way.”