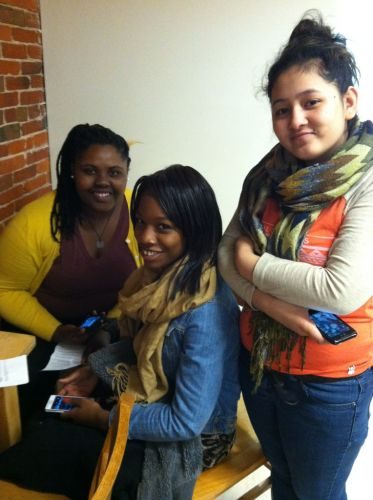 Yesterday, Denise, Royal, and I conducted an introductory Vojo workshop with youth at Cambridge Community Television (CCTV). Denise Cheng is a CMS Graduate Student and a Researcher at Center for Civic Media, and Royal Morris is an MIT undergraduate working with Vojo through the Undergraduate Research Opportunities Program (UROP). We all met in Central Square in Cambridge to train CCTV youth how to use Vojo so that it could be used today to interview voters about their election choices. CCTV is “a nationally recognized community media center that is the voice and vision of all residents, businesses, and organizations in the city” (more info here). Upon arrival at the CCTV headquarters located in Cambridge, Denise, Royal, and I were greeted by Neha Agrawal, CCTV’s Youth Media Coordinator, who introduced us to a cohort of high school students who will be interviewing voters using Vojo during today’s presidential election.

The workshop began with an introduction to the Vojo mobile blogging platform that is being developed at MIT. For those unfamiliar, Vojo is a mobile blogging platform that allows users to create multimedia content from virtually any type of mobile phone. Vojo’s VOIP-Drupal technology is based on IDEPSCA’s Vozmob, a collaboratively designed mobile blogging platform for day-laborers and low-income groups in Los Angeles. The proliferation of smartphones today has allowed for a multitude of functionalities for users, especially the ability to post a variety of media content to the internet using apps and other software. However, tens of millions of people in the U.S., and the majority of people throughout the world, continue to use non-smartphone feature phones. Both Vojo and Vozmob allow users to take advantage of feature phone functionalities, such as integrated cameras and recorded audio files, to post media content to the web. For more information on Vojo and Vozmob, check-out our other Center for Civic Media Blogs.

Denise briefly introduced Vojo to the CCTV youth, covering the influence from Vozmob, development at MIT, and current projects. One of the current projects mentioned is the Parking Day project launched by CCTV, which used Vojo to interview people in Cambridge about transportation. Another campaign mentioned is the 21 Days of Questions, which is a Cambridge Campaign Against Domestic Violence. The 21 Days of Questions is using Vojo to involve people at large by texting questions to the campaign. From my experience with Vozmob, I mentioned how day-laborers in Los Angeles are using the Vozmob platform to voice their disagreements against the anti-immigrant Arizona law SB 1070, which criminalizes undocumented immigrants and grants local law enforcement the authority to demand documentation from people that “look illegal.” With Vozmob, day-laborers were able to voice their perspectives on these laws, many as immigrants themselves, which are often overlooked or overshadowed by mass media.

Putting the “work” in workshop, we broke into smaller groups of 3-4 people to begin using Vojo for the first time. Each of these smaller groups were facilitated by Denise, Royal, Neha, and I. The workshops were guided by the experience of the facilitators, but we also distributed a paper “zine” created by Denise that provided a short overview of Vojo, and also an instructional guide created by Royal. The first step in getting started with Vojo entailed creating an account with an MMS. Youth were instructed to send a picture MMS with a message to CCTV’s Vojo’s group email to create their first Vojo account. This initial MMS both creates a Vojo account and also appears as a blog on the Vojo website. Once accounts were created, we moved on to create audio messages on the Vojo site by using the CCTV Vojo group phone number. By calling the CCTV Vojo Group phone number and following the prompts, we recorded voice messages and published them online directly from our phones. Once everyone had used the MMS and voice calling features, we allowed time for experimentation among the groups and we looked at the content that we posted on the Vojo website.

The workshop was a great learning experience for our Vojo Team. It was a great break of pace from our usual testing within the confines of MIT, and it is always refreshing to view the Vojo platform from the point of view of new users. This is important for the development of the Vojo platform, because even though things went smoothly overall, we still encountered small hurdles and areas for improvement. Most importantly though is the ability to engage with people face-to-face and to hear first-hand how people intend to use Vojo for their specific needs.