Here’s what we know:

At 2:50 PM two explosions occurred along on Boylston Street near the finish line of the Boston Marathon. Police later detonated a third device further down the street.

Beyond the presence of As of 6 PM, two people are dead, and nearly 90 injured, according to the Boston Globe. At Civic, we have been following along through both broadcast and social media, including the Globe’s liveblog and Completure’s News Scanner.

The Boston Marathon is one of the country’s preeminent sporting events. It draws athletes and spectators into the beating heart of one of the world’s best cities.

Civic is located almost directly across the river from where the explosions occurred. The blasts were audible from the MIT campus. Members of the immediate Civic family have checked in. Some were at the marathon. All are safe.

Not everyone has been lucky enough to contact their loves ones as we have. On the Boston Marathon website you may search for runners and check their status. Google has launched an instance of their People Finder for the emergency. The Red Cross’ Safe and Well system appears at the moment to have been overwhelmed by demand.

Geeks Without Bounds is maintaining a Google Doc of resources, including spreadsheets where people can both offer and request housing. 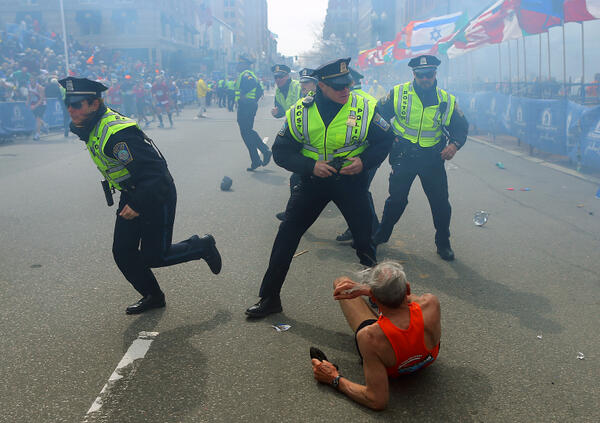 I write this as a native. My mother grew up in Everett. My father grew up in Melrose. Like my Civic colleague Matt Stempeck, who attended the marathon today, I was born in Reading. I love Boston. I love its people. I love its tradition. It is my home. My heart hurts. And then I think of Carlos Arredondo.

Arredondo became a peace activist in 2004 after he lost one son in Iraq and his other committed suicide in grief. A Costa Rican emigrant, he became a citizen in 2006 with the help of the late Ted Kennedy. He happened to be near the finish line today and rushed to assist first responders. A man who has suffered such loss, such grief, continuing to do all that he can to help other members of the nation he can now call his own.

Carlos Arredondo gives me hope. He reminds me that, despite all evidence to the contrary, there is good in the world. As did Patton Oswalt, the acerbic comic, who today wrote some words I will try to always remember: “So when you spot violence, or bigotry, or intolerance or fear or just garden-variety misogyny, hatred or ignorance, just look it in the eye and think, ‘The good outnumber you, and we always will.'”

As a wise man once said:

Hope for Boston. Hope for peace.

All photos, except the last, credit the Boston Globe