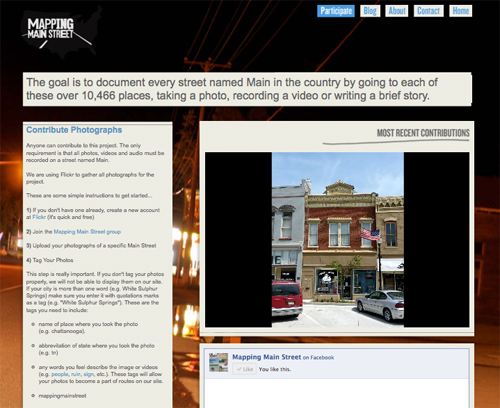 Jesse Shapins from Zeega (http://zeega.org/) came by the Center today to demonstrate the Zeega editor. I was eager to see it in action after hearing from the Zeega team at events including the Knight/Civic Conference earlier this summer (http://civic.mit.edu/blog/natematias/story-and-algorithm-a-comprehensive…), a Civic lunch last (http://civic.mit.edu/event/civic-media-lunch-zeega), and from
Catherine D’Ignazio (http://www.ikatun.com/kanarinka/), an incoming Center graduate student who has been a member of the Zeega dev team.

Jesse begins by speaking about the origin of Zeega in Mapping Mainstreet, a project he worked on with fellow Zeega cofounders, Kara Oehler and James Burns for NPR 4 years ago. Mapping Mainstreet is a collaborative documentary project that invites people to consider that there are over 10k streets in the US called “Main Street” and to contribute media and stories that help to illustrate the variety. The project site states, “The goal is to document every street named Main in the country by going to each of these over 10,466 places, taking a photo, recording a video or writing a brief story.”

Technically, Mapping Mainstreet is a website that recontexualizes media posted on Flickr and Vimeo using these service’s API’s. Users can contribute media by uploading media to the project group pools on Flickr or Vimeo and by following some guidelines about titling and tagging this media “mappingmainstreet”. Jesse recounts that creating the site was time and coding intensive. After creating it, James, Jesse, and Kara had the idea to build a tool that could make this kind of site less expensive to create and less reliant on coding skills.

Zeega thinks a lot about how to make a collaborative project that people will participate in. Creating the technical platform for people to leverage existing media services is one thing, and creating a framework that is inspiring and motivating for peopel to participate in is another. He believes that the mapping mainstreet project is successful in part because everyone can relate to it and because it’s easy to see that you are contributing together with a larger collective.

They also think about creating immersive storytelling on the internet. The Zeega editor lets you create a story similarly to Mapping Mainstreet. You can create a collection of media chosen from web services with open API’s. Currently, Zeega supports public files on YouTube, Flickr, SoundCloud, Tumblr, Dropbox and URLs that end in .jpg, .gif, .png, .mp3 and .mp4. Jesse demonstrated arranging media found on the internet into frames and frames into sequences. He showed how Zeega allows you to link sequences through parts of a frame — you can create a sort of a hotspot on a frame and link it to another frame or sequence. We spoke about how this is more immersive than other web story-telling — when you have finished your Zeega, you can publish it and people experience it full screen.

link to my first zeega.

To see some of the finished projects that Zeega Productions has helped to create, check out: http://beta.zeega.org/productions. You can get a sense of some of the ways that Zeega interactions and storytelling happens.

The Digital Archive of Japan’s 2011 Disaster uses the Zeega software to share a collection of media from various media services on the web. Among this collection, you can create your own collection to tell a story that is meaningful to you. Collections function similarly in the editor tool.

Finally, we spoke about how Zeega can fit with some of the collaborative storytelling projects that people are working on at the Center. There are many possibilities to use Zeega in collaborative filmmaking processes. It would be a great tool to use in sharing story-boarding ideas, in making selects from raw video, in sharing sourcing other media.