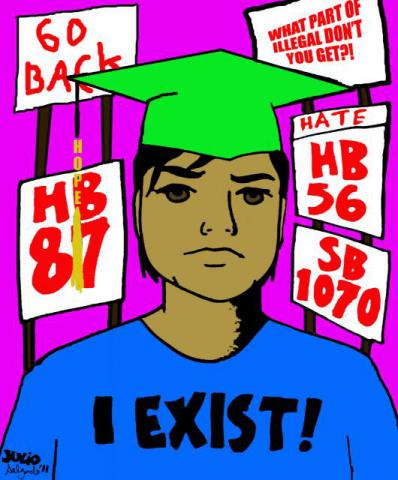 The following is a summary of an interview with Julio Salgado regarding a project with the Center for Civic Media at MIT on the role of Media and Technology in Social Movements.

About Julio Salgado and Dreamers Adrift

Julio Salgado is an “artivist” and one of the four Dream Act-eligible founders of the Dreamers Adrift project. Dreamers Adrift is an online website that was created to humanize the experiences of undocumented college graduates. In Julio’s words: “We started as a way to…put a face…to the daily…things that…us undocumented folks have to deal with.” Much of the focus of Dreamers Adrift has been related to the Dream Act because of the long relationship the founders had in the years trying to pass the legislation. The video “The Science of DREAM” specifically portrays this relationship that Dreamers have to the Dream Act in an imaginative and allegorical fashion. The aim of Dreamer’s Adrift is to create content that speaks directly to undocumented immigrants. “Undocumented folks can see themselves in this [Dreamers Adrift]” stated Julio. The content that Dreamers Adrift creates includes visual artwork, videos, music, and blogs. In this sense, the site is “almost like an art project,” said Julio. Furthermore, Julio spoke about how the founders of Dreamers Adrift are intentional in relating their art to the broader Immigrant’s Rights Movement. For example, Julio mentioned how the site can be a “tool for people to use in their presentations.”

The “I Exist” Collection

As a movement illustrator, Julio incorporates mechanisms for engagement in his artistic approach: “I’m an artivist, meaning…I use art as a form of activism.” For example, Julio has created a collection of illustrations specifically for the Dream Act: “I call them the ‘I Exist’ Collection,” he said. The collection was named “I Exist” in order to directly address the dehumanizing language of anti-immigrant discourse. In Julio’s own words: “The language that anti-immigrant folks have used [aims to]…erase our identities or erase the fact that we exist here. So I wanted with my artwork kind of to say, ‘hey listen, I exist,’ [and] it’s almost like a scream.” As such, many of the illustrations in the collection contain the phrase “I Exist,” which is both a personal declaration for acknowledgement and a rallying cry for the Dream Movement. Another function of Julio’s art is to provide the visibility to undocumented youth that is often denied through other means. “I think it’s really important for us to kind of leave our mark and document ourselves through art…and so that’s why I call it the “I Exist Collection.”

The mass deportations of undocumented immigrants in 2010, and the mobilizations to stop the deportations that resulted, were both factors that led Julio to create his art. There were many actions and demonstrations led by undocumented youth in 2010, such as sit-ins in federal buildings, marches, rallies, and other forms of activism. One of the demonstrations that inspired Julio was the Trail of Dreams, a mobilization led by four undocumented youth to march 1500 miles from Florida to Washington DC in support of the Dream Act. *UPDATE* However, Julio recently clarified that he was inspired by the courageous arrests of undocumented youth engaged in protest in general, as there were no arrests during the Trail of Dreams. “That whole movement inspired me,” said Julio, and he thought to himself “I need to draw this and create something…hence all the posters of students…getting arrested.” During this time, Julio and three other friends (the future founders of Dreamers Adrift) were working on a project to document the movement. “We wanted to…create a…website where students can…come together and…record their stories, and like have a voice,” commented Julio. However, efforts to create a website that upholds the voices of undocumented youth and that maintains the integrity of their perspectives became complicated through the involvement of other actors. “That project didn’t work out. We were working with other…people who were citizens…so we felt that…voices of undocumented youth were not being heard.” These complications described by Julio underscore a long history of social movement dynamics, where privilege and power politics among people joined through solidarity can recreate societal barriers, privileging the voices of those with most power over those with less. In this particular case, it was the privilege that comes with citizenship that overshadowed the voices of undocumented youth. “There [were] differences…creative wise and we felt that the message wasn’t coming across. We almost split…[however] we still wanted to do something but we weren’t sure what we wanted to [do],” he said. And so begun the challenge to document and preserve the voices of undocumented youth through media, as the group considered blogging and creating a Facebook page.

Day of the DREAMs

According to Julio, the idea for Dreamers Adrift was inspired by a Dia de los Muertos celebration. Taking place in early November, Dia de los Muertos or Day of the Dead, is a Mesoamerican celebration that honors the memories of the dead. As part of the Dia de los Muertos celebration, people build altars for their departed friends and loved ones, decorating them with family photographs, sentimental objects, candles, and the favorite foods and drinks of the deceased. In the fall of 2010, Julio and fellow Dreamers decided to build an altar to honor the dreams of the Dreamer Movement for Dia de los Muertos. “We were like, ‘let’s make an altar.’ Not sad…representing not the death for Dreams, but [a] celebration of Dreams that [have] not come,” said Julio. He also added: “We wanted to use that concept and pay homage to the people who…have been working really hard and going to college but…they can’t [use] the degrees. So we created this altar.” One part of the project involved the creation of an altar that was decorated with the graduating sashes, caps, and medals of each Dreamer, Julio’s illustrations, family photographs, and most importantly, the hard earned degrees that could not be put to use without immigration policy reform. The other part of the project involved a video, which became the “Dia de los Sueños” or “Day of the Dreams” video. “We recorded ourselves and…we each [explained]…what the Dream Act meant for us…and what college degrees meant for us, and we laid out all these college degrees,” he said. Following the editing of the Dia de los Sueños video, the Dreamers involved were inspired to share their content with others through the web. The first step consisted of sharing the video through Facebook, but the amount of positive feedback on the video led Julio and the others to explore other options. “It became this sort of…creative outlet. [That’s how] we came together as Dreamers Adrift,” stated Julio.

When speaking about day-to-day media practice, Julio mentioned some of the challenges that can arise for him and fellow Dreamers. Some challenges are due to the geographical distance between the collaborators of Dreamers Adrift. “Um, it’s tricky (laughs). Daisy…lives in Orange County…Fernando…just moved to San Bernardino…Jesus lives in Inglewood, and I live in Compton…[so] it’s really hard to…try to get together,” commented Julio. Collaborating across distances can pose problems for any group, regardless of citizenship status. However, undocumented groups in Los Angeles face the additional challenge of navigating a city designed for automotive travel: “The fact that we’re undocumented…makes it a little [harder]. We don’t have [driver’s] licenses.” As a result of distance, Julio mentioned that the Dreamers Adrift group conducts many meetings over the phone. While much strife may arise on a day to day basis, Julio comments that his involvement with Dreamers Adrift has been a pleasant experience. “We’re actually happy to have this project because it is…a creative way to use what we’ve learned in college. I have a degree in journalism [and] there’s…writing involved [and] interviewing involved,” said Julio.

Despite not having internet access at home during the time of this interview, Julio has found other means of staying involved with the project. “Right now…I don’t have internet at home, so I have to go to…Starbucks.” The internet access provided by coffee houses such as Starbucks has allowed Julio to apply his artistic abilities to the needs of the movement. For example, through the Internet, Julio maintains contact with a national network of undocumented youth. His artivist talents come into play as he learns of detained youth throughout the country and he incentivizes direct action through his art. “Today…there’s two deportation cases…[involving] Dream Act eligible students. One is detained in immigration and the other…he’s in jail. One is in Alabama [and] the other kid is in Florida. What I do is…I draw their picture and I put a link. They’re [Dreamers are] asking for signatures to try to get people out of jail,” explained Julio. By creating artwork that centers on detained youth and by inserting web links to petitions into them, Julio simultaneously raises awareness of particular cases and incorporates the mechanisms for direct action into his art.

“I need to go out of my way to [be involved with Dreamers Adrift]. I don’t have internet at home because I can’t afford to pay it. We really wanna do this…but our personal lives…get in the way because we don’t really have the resources to say ‘we really wanna do this full time.’ There aren’t really that many resources for undocumented folks. Sometimes battling…our daily…hardships and challenges get in the way of creating. But nonetheless…it makes the work…[have] more substance to it. Nobody is paying us to do this…we’re doing it because there’s…this need…to create something and…[to] feel that we’re…doing something. I don’t have the money to go bail people out. I don’t have the money to say, ‘hey, I wanna hire an attorney for you.’ But you know, through this, through media, through these videos, we are…showing the frustrations that we have as undocumented folks…in the U.S….and the people are getting that.” -Julio Salgado

This concludes Part 1 of 2 of this interview summary blog.

I would like to thank Julio Salgado once more for agreeing to collaborate with the Center for Civic Media: Thank you Julio!