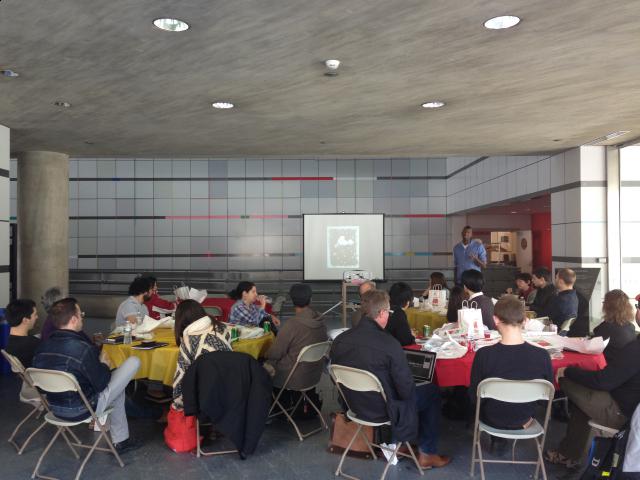 On Thursday, February 6th, the Civic Art Initiative recently partnered with the List Gallery at MIT to host a lunch and participatory art event with artist Kambui Olujimi. Here’s a brief excerpt about his project which is installed in the Bakalar Gallery until Feb 23rd:

Kambui Olujimi works in a variety of media, ranging from film to installation to photography. His past projects have often included viewer participation in projects that explore social practices such as dream interpretation, penny wishing, and photo sharing. List Projects: Kambui Olujimi features A Life in Pictures, an interactive installation functioning as a social space where visitors will be invited to exchange their own photos with selections from the artist’s photo archive. For this project, Olujimi will provide over two thousand of his own photographs to exchange with visitors’ pictures from their lives. Participants will be asked to record and share their thoughts about the personal photos that they have contributed and the ones they’ve exchanged from Olujimi’s archive. The picture exchange mimics the way the public shares images online but that exchange is recontextualized by creating a physical space for individuals to give and receive photographs. A Life in Pictures allows visitors to interject moments from their own lives into a larger shared life in pictures. — from the List’s project page

Kambui introduced us to A Life in Pictures by first giving us a brief overview of his work. He shows projects like Hide and Seek,  a piece for the Bearden Centennial, that explore ideas of commemoration. “When we commemorate someone, we often obscure the individual,” says Kambui. In this project, he wrapped trophies with paper, showing what becomes just beyond us.

He describes how, after 9/11, we saw a cycle of accusation, rewards, and suspects. In The Clouds are After Me, Kambui put together 350 wanted posters that featured clouds. Some of the pieces reference actual events from the time the work was being generated (Bernie Madoff, etc) and others reference categories of legal persecution. “The breadth of the work was beyond you as a viewer” says Kambui, with the pieces distributed across both East and West coasts.

Kambui returned to the US after living abroad just as the 2008 recession hit. In a lot of conversations, people expressed that they were doing their best — hitting against prescribed roles and capacities. In Finding and Forgetting, Kombui created a piece inspired by the Cyclone roller coaster in Coney Island — a rickety wooden construction that everyone expects to fail, and that continues to ride on. Finding and Forgetting is a series of platforms that require an action from two dancers in two spaces who danced to synchronized soundtracks until they reached exhaustion. A year later, Kambui put the piece together and danced an entire work day. He was inspired by dance marathons from the 20’s and 30’s.

“Was there music?” asked Catherine. “Oh yeah,” says Kambui. He started out strong in the morning, but he lost motivation from 8am to noon. Around lunchtime, people started to join him. From 2-5pm, he struggled with cramps. Then, a good friend joined him; “Are you going to stop now?” No way!

In A Life in Pictures, Kambui is interested in the relationship between the individual and the collective. “How do individuals become abstracted?” he asks. In the installation, constructed as a quasi-domestic space, a pile of chairs and projectors show 1200 printed snapshots from his life strewn across a long table where people are encouraged to sit and sift through the photos. Participants can bring a photo from their life and take away with a photo from his life. The project starts out as a biography of Kambui and changes over time into a “biography of our time.” He has done the project five times in different locations around the world and the archive has gradually transformed into something beyond just the autobiography of Kambui. If a participant wishes, they can conduct an interview about the photo they brought and describe why they chose to take away the photo they take away.

After Kambui’s talk, the group adjourned to the installation and spent over an hour sifting through photos, sharing photos they brought with each other, and talking with Kambui about where the photos came from. Many people made photo exchanges and several conducted interviews.

About the Civic Art Initiative

The Civic Art Initiative is a series of lunches with guest speakers and civic artists who will explore the possibilities of these emerging expressive forms, share their work, and incite conversation. We invite partnerships and collaborations as we chart this path. In the future, we hope to host workshops with visiting artists and, invite civic artists to be in residence at MIT, and develop art-centered approaches to civic and cultural change with MIT students and communities.

The Civic Art Initiative is organized by Catherine D’Ignazio and Desi Gonzalez and hosted by the MIT Center for Civic Media and Comparative Media Studies/Writing with the support of Foreign Languages & Literature and Digital Humanities.