Joi Ito’s 9 Principles of the Media Lab from MIT CMS/Writing on Vimeo.

Liveblogged at #civicmedia with help from Ed Platt. Any errors are likely ours.

Joi Ito (@joi), Director of the MIT Media Lab, is here to share his nine principles.

Nearly thirty years ago when the Media Lab was founded, the internet was about connecting together supercomputers. The Media Lab was all about empowering the individual and making everything digital. The Lab’s founder, Nicholas Negroponte, wrote Being Digital.

What’s changed in these last thirty years is that we’ve made a lot of progress empowering the individual, and as a result, we now have a network. When you have a network, you need to think about systems rather than objects. ‘Media’ is plural for medium, and a medium is something in which you can express yourself. In the past, that was hardware: displays, robots. Today, a medium can also be society itself. Applied social science and journalism are newly relevant.

Joi would divide his life into two phases: BI (Before Internet), where life was simple and economists were occasionally correct in their predictions. And Post Internet (PI), where outcomes are almost random and nearly impossible to predict. The Media Lab’s core DNA is the same: practice-driven. The demo is the atomic unit of the Lab; Nicholas used to say students were to “demo or die”. Post Internet, Joi has updated this mantra to “deploy or die”. He wants Media Lab projects to touch the real world directly.

The internet as a technology and a set of protocols allowed hackers to build Internet Service Providers and compete with the telephone companies. The protocol itself was so open that Joi and a bunch of used hardware could connect people to one another. Networks and connectivity that once cost thousands of dollars came closer to zero. This allowed things like free and open source software to flourish, especially in the backend space. This combined with Moore’s Law changed communications systems.

If you think about Facebook, Yahoo!, and Google, they bought off-the-shelf PCs, installed existing software, and put in some sweat equity. We got kids competing with incumbents. The cost of innovation, or trying a thing, dropped to nearly zero dollars. Institutions like journalism required studios, expensive cameras, and satellite transponders. Publishers needed presses. The capital requirements demanded proposals and, importantly, permission. The internet has created the ability to innovate without asking permission.

All of Silicon Valley’s great companies today started Post Internet. AnnaLee Saxenian’s Regional Advantage presents one theory of why Silicon Valley has stolen the innovation mantel from the Boston area, that people there didn’t feel the need to ask permission.

Even expensive hardware businesses are now open to disruptive innovation, as seen by Media Lab companies like Formlabs. Nicholas and Joi disagree on something: is a commercial startup the best place to confront big ideas? Nicholas says that startups can’t house big ideas. Joi believes that venture-backed startups work for some big ideas, but not all.

Safecast was able to build their hardware and software platform with just a small grant. Funders are too shy around important sectors like journalism; this is where the Knight Foundation comes in. Sending a whole bunch of journalists into Syria isn’t going to work for a startup, though, and requires more money than a seed grant will provide. 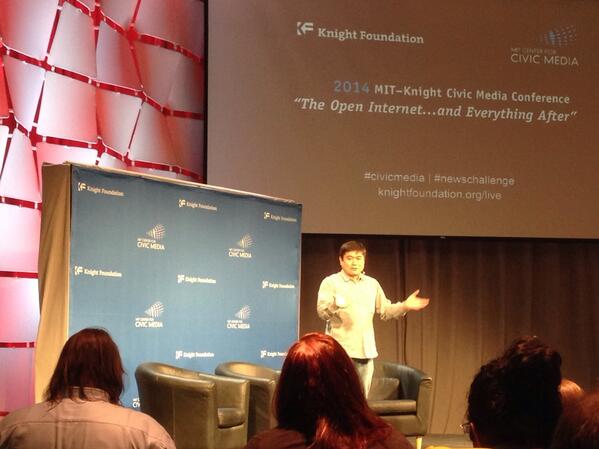 Reading the stack of Pulitzer Prize applications, Joi noticed that the best work in journalism required some capital: a team of lawyers protecting the authors from lawsuits, a security team protecting them from personal harm. Startups aren’t built to provide this, and citizen journalists are unlikely to be able to provide the same caliber of international coverage.

Money used to correlate pretty closely to power. If you had money, you could kick back and make everyone come pitch you. But these days, entrepreneurs start things without even presenting to venture capitalists. Investors are clawing their way into deals and have to justify their presence more than they did in the past.

At the Knight Foundation, they convene meetings and explain that the community gathered here provides value beyond the initial philanthropic investment. The diminishing cost of innovation has forced actors with money to behave a little better.

But there remains a challenge: how do we take on the problems in a way that doesn’t start small?

When Joi invested in Twitter, people criticized the decision, arguing that Twitter is a feature, not a company. Pre-Internet, Joi agrees with them. A faculty member at the Media Lab claims to have basically invented the Twitter feature thirty years ago. It’s true, but Pre-Internet, that feature’s pretty useless.

We’re operating in an ecosystem now, with no one that’s necessarily in charge. We used to design things for a specific purpose, but now we need to think about design more like we think about giving birth to a child: they’re going to go places you can’t control, but hopefully it has your DNA and generally heads in the trajectory you’d like things to go. The solution to journalism, civics, and governance won’t be a single a-ha moment, but the cumulative effect of work done together in a network.

The open internet is the air, water, and soil of a garden, and we’re the gardeners who must turn these raw materials into something vibrant. 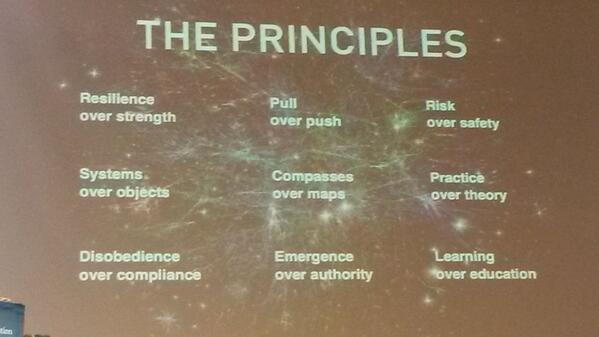 Instead of rigid Newtonian Laws in the Pre-Internet era, we need to be comfortable with guiding principles.

Disobedience over compliance
This is tricky for faculty members. But you don’t win Nobel prizes for doing what you’re told. We need to create institutions that are resilient to the automatization of the world, and that requires disobedience and asking questions. A lot of civics is about disobedience.

Pull over push
You pull from the network as you need it rather than keep everything in stock. Safecast started after the earthquake in Japan, but outperformed NGOs that had spent years planning for disaster. They were agile. Resources you consider assets actually become liabilities when you want to be agile.

Compasses over maps
We can’t over-depend on planning. Joi points to the time a Japanese firm paid consultants $3M to consider a $600,000 investment. This maps to facts vs. theories. Rather than spend your time and resources considering theories, we should try things, and fail or succeed, we’ll have actual facts of what works and what doesn’t. Building things to test and determine “facts” has become much cheaper than consultants.

Emergence over authority
How does a system’s authority exist? The heads of many successful open source projects are quiet types, with lots of emotional intelligence. Authority’s the opposite of that – like in the finance industry, where people come in with titles and club each other down. It works because you’re all getting paid. But in volunteer communities, talent and leadership need to emerge more organically.

Learning over education
Education is what someone else does to you. Learning is what you do to yourself. Learning should be the focus, not the education.

Q: How do we share knowledge? Can we “pull” faster?
A: The conference is a great system, and people have experimented with lots of ways to share knowledge, but people are busy and have different languages. There’s an interesting parallel on the web with the semantic web people, trying to card-catalog everything, vs. people who just let things be messy and use search.

There are several different approaches at the Media Lab. There’s data mining and machine learning, detecting patterns. And there are people-driven approaches.

Q: You have a couple of positions that give you an interesting perspective on journalism (Knight, The New York Times). Where do you see business models going in journalism?
A: That’s the billion dollar question. I don’t have a view of what’s going to work — there are a lot of moving variables and it’s pretty unpredictable. I’m on all of these boards because I think we need to try everything. There’s a whole bunch of models we’re trying at the New York Times. The point of the Knight News Challenge is to try a lot of things and see if we can find a business model somewhere. The news folks realize that we’re in a moment of crisis. What’s interesting is the extent to which the news companies are willing to get together and coordinate.

Q: Which principle do you struggle with the most?
A: Resilience over strength. Rather than bulk up and resist failure, invest the same resources in recovery. When you’re surrounded by other planners, you tend to focus on structure and preventing disaster.

And then Ethan comes on stage wearing a patchwork of pants and vest.