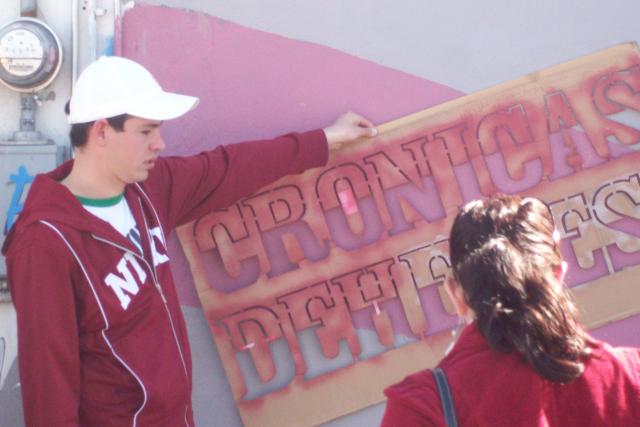 Crónicas de Héroes, the Juárez Mexico deployment of Hero Reports, rolled out late last year with incredible success at the local level. Since November more than 700 accounts of generosity, kindness, and empathy have been reported by the Juarenes. Today cronicas are being read over the airwaves by local radio stations and printed in local newspapers. Media from Juárez’s sister city of El Paso and Mexico City have covered the campaign. And the site has attracted visitors from Japan, Brazil, Argentina, France, Venezuela, Thailand, Portugal, Jamaica, and Ecuador. Recently, Alyssa Wright, founder of Hero Reports, and Yesica Guerra, Manager of Crónicas de Héroes Juárez, were invited to speak about the project at TED.

The success of the campaign has been measured by the fact that with these contributions, residents have reclaimed and reauthored the narrative coming out of Juárez. While the news media will continue to print stories about violence, chaos and fear, Cronicas has shown that those incidences are not the whole story. Juárez remains a place where businesses thrive, families raise new generations, and where neighbors take care of one another.

Hoping to bottle some of the success of Juárez, we’ve spent time trying to tease out what worked and to understand how those strategies could be refined and redeployed in Monterrey and Tijuana.

Passion and Personal Connections – Much of the success of Crónicas de Héroes Juárez is attributable to Yesica and her counterparts on the ground in Juárez, local representatives Brenda Guerra and Marco Betancourt. Their shared enthusiasm and dedication to the project coupled with their intimate knowledge of the community and savvy outreach approach undoubtedly opened doors. Early on Yesica realized that her efforts to push an MIT research project via email and phone calls would only get her so far. Using a tag team approach, Yesica would have Brenda and Marco follow-up with her contacts in person to further pitch the campaign, arrange interviews, and deliver postcards in order to maintain momentum, solidify relationships, and reinforce the grassroots legitimacy of the campaign. Yesica and her team also scheduled pre-launch workshops in a variety of businesses, schools, and civic institutions. With Brenda and Marco’s help, Yesica had the manpower she needed to outreach to big tent of users – from school children and college students to nurses and doctors to elderly members of the community. Every workshop attendant filled out a postcard with a report of a kind and generous act, which was then uploaded on the site.

Hyper-local branding – Before Crónicas de Héroes officially launched, we covered the City of Juárez in billboards, posters, and postcards with images reminiscent of iconic pop-culture figures El Santo and Tin Tan. El Santo, the masked wrestler, is a legend and a symbol of justice for the common man with heroic abilities to fight and defend the vulnerable. With a career than spanned nearly five decades, El Santo resonates with multiple generations. Yesica’s poster design includes a masked wrestler from the golden age of wrestling, when fighters were folk heroes, inspired by the image of El Santo. Tin Tan was actor, singer and comedian that began his career in Juárez; the local hero starred in more than 50 movies during his 30-year career. Images of these compelling cultural superheroes asking for stories about positive and kind neighborly acts spoke to the emotions and imagination of a wide array of Juarenes who responded with reports about every day instances of heroism.

Anonymity – Like any good superhero, the campaign was intentionally cloaked in mystery. Crónicas de Héroes Juárez tried to minimize and downplay its true identity as a research project from MIT. Because the focus of the project centered on the general Juarenes community and did not align or closely associate itself with anyone particular group, the campaign could belong to the entire City. The Center felt strongly that this strategy was necessary for the long-term sustainability and viability of the campaign.

Going forward our community outreach efforts are dedicated to sustaining a culture of reporting through community activities that keep the spirit of Crónicas de Héroes alive, foster pride and enthusiasm, and transcend cynicism. Recently the Juarez team was approached by UNION a local group of street artists interested in painting murals to promote and celebrate Crónicas. They wrote, “To paint these murals inspired on Cronicas proves that there are good things happening in this city, guns and death is not the only things that occur in Juarez.” Using donated materials including some paint and brushes, UNION and more than 20 citizens came together for a mural painting in Park Borunda last weekend. At this event, Brenda along with five volunteers collected more than 75 Cronicas from participants and passersby. Two more murals are planned and this summer Yesica, Marco and Brenda will be promoting the site through a public art competition and at festivals and celebrations. We hope that these activities will cultivate a loyalty and commitment to Cronicas that will inspire new reports and keep the site vibrant and relevant.