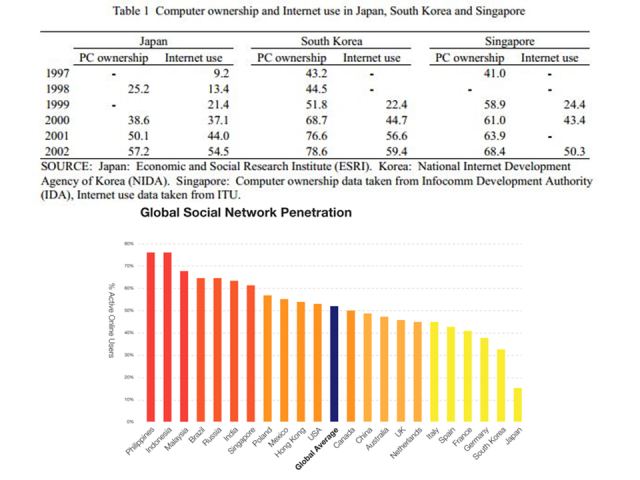 Japan is often represented as a high-technology country, so statistics below often surprise people.

However, these statistics does not surprise me much. Why? – because I have been experiencing it since my childhood; the first time I “operated” a computer was in a computer room in high school. I remember my parents and brother using a computer at home, playing some games and reading, but I didn’t bother to touch it – or didn’t have a need to touch it. During my high school, I took an exchange year in Minnesota – I brought my parents’ laptop to make skype calls or write email with them – and I was so surprised to see all the students owning their own laptops. They were using it for everyday homework, watching movies, and making their own website. Soon enough, I was emerged into this culture as well and fortunately got prepared for my current heavily-computer-dependent MIT life…

So, why was I not exposed to computer and Internet in Japan? Was it just me?
There have been some research trying to figure it out , but my experiences led me to consider the following reasons:
1. I didn’t have any homework/assignments in schools that required me to use computers. – Our main education methodology is to learn from books, think analytically and quantitatively in heads, and write on paper. There was some “research” assignments, but we preferred books or talking to someone; didn’t even consider the option of searching online.
This issue can be considered as digital inequality – because some schools in Japan may not be like my school, and encourage more use of critical thinking based on intense research. Although Japan does not struggle in the educational literacy issue (because of 99% of Japanese literacy rate), it has some issues in the educational methodologies and the incentives/motivations for more information resources.

2. There were “network system” of cell phones, that was different from the Internet . – A long time before the SmartPhones appear in this world, Japanese people had quite sophisticated phones already, where we could use to search information, send email, etc. We call them “galapagos phones” – phones that went through their own evolutions as if they were on their own galapogos island. The network systems on those phones were called “i-mode” or “ez-web”, varying in different phone providers. There was a “menu screen”, where we could search for the topics we wanted to see. There was apparently an option to type in the URL, but I didn’t even know about it until I did some research just now…
People were used to having phones, which were super convenient and “smart”, – this for sure affected the use of computers and even the penetration of Smartphones.

Even after I got used to browsing on the Internet, I noticed some interesting things: Japan makes its own way for each popular technology that’s used globally! (for no purpose…)
The most compelling example is mixi. It’s a social networking service where you can post your feelings with your “my mixi friends”, comment on others’ pictures and join communities. Basically, it’s Japanese-version of facebook. You may argue that there have been always many other services like facebook, such as Google + and MySpace, so it may not be surprising … however, mixi was VERY popular in Japan. Everyone was on there. The more creepy fact was that, no one knew about facebook until SmartPhones started to be popular in Japan. It makes sense, because facebook was not compatible with the galapagos phones.

Well, the time has changed since that time a bit, and Japan is now extensively trying hard for “digital inclusion”. Two following practices caught my attentions:

Although the cell phones are the major medium in Japan, it still creates inequality due to the capability to use technologies. One of their solutions is a specifically-designed cell phone for the elderly, called Rakuraku Phone. All the texts that appear on the screen are very big, and the phone only contains what is needed for the elderly such as phone, texts, camera, weather, etc. My grandmother used to have it as well, and I remember that the manual for this was also very well designed. As a technological country, Japan, it is natural to seek for the technological solutions.

One of the concerns that the tourists had in Japan was the lack of WiFi access; it makes sense, because not many Japanese people casually had laptops or other Internet-based devices before SmartPhone appears. Recently, there has been an increase in the claims even from Japanese citizens, and the project my hometown, Kyoto, is starting is to create WiFi spot in 385 places around the city. This lets people connect to the digital world more often and easily.

Looking at these challenges and practices of digital inclusion in Japan, I perceived it that there is not much sense of global digital inclusion; it is mostly just in national scale. And, I think that this is due to the language, culture, educational system and ironically the “unique” technological advancement in the country.