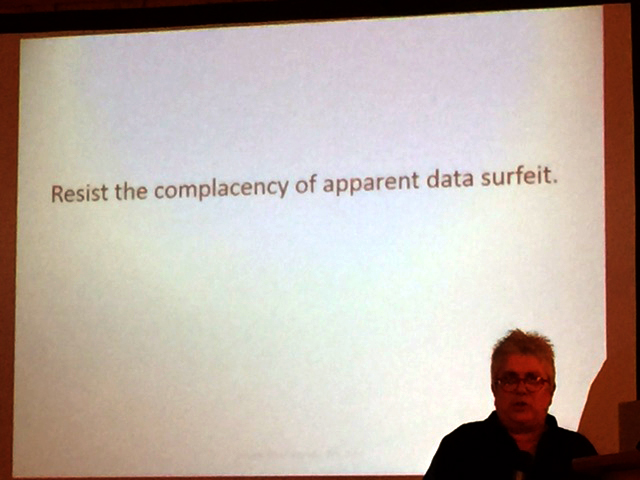 From the Boston Public Library’s description of the talk: The Leventhal Map Center and the Boston Map Society welcome Joni Seager, Professor and Chair at Bentley University to talk about her book “State of Women in the World Atlas.” In an age of data overload, the paucity of gender-disaggregated data persists. Mapping the status of women reveals a great deal about the state of the world, but the view is at best partial.

Professor Seager is a feminist geographer and author of the internationally renowned “State of Women in the World Atlas” first published in 1986. Now in its fourth edition, the atlas has been published in more than a dozen foreign-language editions; in 2016 it will be released in Persian in Iran. Joni has worked with a number of governments and the UN on developing gender-sensitive statistical protocols. She is also a globally recognized expert in the field of gender and environmental policy, and has worked around the world on projects in this field.
Joni’s talk is in conjunction with the Women in Cartography exhibit currently showing at the Boston Public Library.

Joni says her work parallels the work of Alice who have been trying to make women in cartography visible. Her work making women visible through cartography started in the 1980’s at Clark. There was a lot of thematic mapping happening then. There were atlases on things like wine and trains and explorers. She and her colleague got annoyed that women were completely invisible in this proliferation of maps. They decided to do an atlas of women. The first came out in 1996. 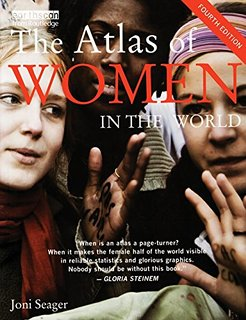 Women in the World. The only global representation of women’s lives through cartography at the time.

When they started this in 1984, they would look at them puzzledly. The authors had a laundry list of 150 topics that they wanted to put in the Atlas. The problem was really the data at the global scale. The data was scarce. There was little curiosity in the official realms of statistics about the role of gender. There were whole domains of inquiry that were blank. One of Joni’s “easy” maps was to make a map of doctors. She thought governments would all have registers of doctors. The WHO was the agency that would have that information and she was looking at their yearbooks and she couldn’t find anything about the gender of doctors, just number of doctors per country. She called the WHO and got their statistical division, and said “I can’t figure out what I’m doing wrong and I’m sure you have this information.” The woman said they should have it and to call her back. When Joni called back the woman said they did not collect the gender of the doctors. She said, “I guess we didn’t think it was importnat information to collect.” In the 1980s there were whole domains of information that simply didn’t exist.

Fast forward to today – information is less cumbersome to retrieve. And there has been an astonishing data explosion, including data on women. World Bank is colleting info on property rights of women. The WHO is tracking violence against women. Other agencies are tracking sex trafficking. So there’s progress, but a lot of it is illusory. For example the WHO has a database called GenderStats – a table in that measures whether women have the final say about whether they can visit family and friends. Another dataset is about whether women get to make final decisions about their health care. The problem is that in all these datasets there is no data. The tables are empty. They have named it as an interesting topic but they haven’t collected the data.

Given the current hype, she thinks this is a good contemporary moment to reflect on data. She asks the question – “If all we knew about women was what’s in the global data sets, what would we know?” Very little. There are astonishing gaps. The global data regimes do not reflect the sophisicated gender analyses in last 20 years. The mainstream data focus is shaped by the same utilitarian and “malestream” perspectives today as the 1980’s. Power relations are masked. The focus is on equality not equity. And the data is productionist or reproductionist. What does this mean? Data are captured by production oriented categories such as waged work. We have had data about women in the workforce since the 1970s. Data that is not productionist is reproductionist, so about specifically topics of contraception and childbearing. Joni quips that women in poor countries seem to be asked about 6 times a day what kind of contraception they use. What’s missing? Well, reproductive rights – access to abortion, for example. The UN Population affairs tracks global laws, but tracking actual vs legal access is not something that anyone collects data about. Many women need male authorization to get an abortion. She shows a map they made about abortion laws.

There are Missing Bodies. The gender data still only shows binary gender categories. Lesbians are mostly missing. Very often lesbian rights are subsumed under “gay rights” and women tend to disappear. Older women are in almost no data sets – maybe because they are neither productionist nor reproductionist.

She has recently put together a field guide to the top 3 ways not to include gender disaggregation:

What’s a girl to do?

We need feminist data avengers. Measurement counts. What gets counted, counts. When it’s not counted it’s absent and invisible. She says, “Disaggregation starts at home.” Wherever you are you can advocate for disaggregation of gendered data. She suggests also pushing beyond the constraints of the data regimes. She discusses women’s sports and bodies and how they would like that to be visible in the Women’s Atlas, but the only map they have is of the Olympics. This is a far cry from what they would love to do, but at least a nod. They also have a complicated map about beauty and the way that norms of beauty are used to police women. All of that is very hard to map so they mapped the cosmetics industry.

She says with Big Data if you put Big Stupid In then you get Big Stupid Out. She ends with a call for everyone — “Resist the complacency of the apparent data surfeit.”

Response to the Question: There are very few women in Big Data. There are few women at Google in research positions. Very few could actually be instrumental. It would be really interesting to bring gender analysis to these big searches.

Alice: Have you had any organizations react to your issues and say they will do better?

Joni: She talks about this at every opportunity. She has heated conversations, for example with JMP. There has recently been feminist activism on the SDG indicators because they are a leading edge. If the SDG ratifies gender disaggregated data in their indicators then everyone else will follow. But there’s a lot of resistance to it even though collecting gender is not rocket science. There are a lot of people pressing on this but it’s an uphill struggle.

Audience: An audience member brings up a recent controversy in which the cell biologists discovered that cell behavior is actually different for different genders. But most of the researchers are males as are most of the research subjects. Some of the revelations show that female cells behave in very different ways but the knowledge base is very small. Grants never mandate an equal balance in the research base.

Joni: There’s been a lot of interest in the lab fields in the problem of using just male mice for the basis of biological research in, for example, exposure to toxins. If they are doing that at the cellular level that’s really interesting. There’s a whole book called “Women are not just Small Men”. Air bags, for example, were designed for a 180-lb 6-foot male and in the beginning were decapitating women. Things are often designed for the normative male body.

Audience: What about doing an atlas just on the US?

Joni: There was one about men and women that came out about 5 years after ours. This would be rich because the country is rich in data. It would be great project but I’m currently atlas-ed out but happy to advise.