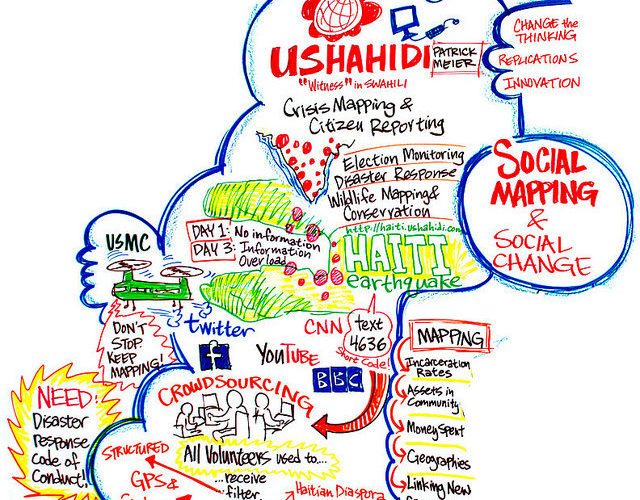 Last weekend (Oct. 11 through 14) was filled with enormous amounts of maps and data at the International Conference of Crisis Mappers (ICCM). Every year the conference gathers enthusiasts, professionals, geeks and wonks from everywhere to discuss humanitarian (information) technology to its best. New ideas were proposed, demos shown, a simulation took place, and a hackaton coded its way away. In a beautiful way, ICCM this year was an spectacular meeting overflowing with passion, creativity and hard work.

Civic mapping has always been at the core of ICCM. Its founders, Patrick Meier and Jen Zemke, were early addicts to the now popular Ushahidi platform, and are very influential voices in shaping the future of crisis mapping and technology-empowered civic engagement. This year, in particular, the conference was filled with civic mapping tools and approaches sometimes repetitive, sometimes inappropriate, but at all times seriously trying to unite social media and civic mapping. Among the many initiatives, I found that four are particularly important to include in our Civic Mapping Toolkit, a project I am working together with my colleagues here at the Center for Civic Media and DataCenter.org:
1. ArcGIS Online: Provided by ESRI, the world largest GIS software maker, ArcGIS online allow users to add a large variety of format in its hosted platform and share it publicly. The platform works completely online and can be integrated with ESRI’s professional software. The advantage is that ArcGIS supports a wide range of GIS specific formats and also gives you the ability to create shapes and add markers online. The downside is that the application isn’t completely free, it isn’t open source and its community is generally populated by GIS professionals.
2. TileMill / MapBox: TileMill is a very interesting software that runs on Macs, Windows and Ubuntu/Linux that allows you to create and style maps. You can then export those maps in a few very basic formats or upload it online for free to the MapBox site (there are limitations in the free account such as map size). TileMill is interesting because it aims to provide a very simple map creation platform, that also allows advanced users to add very interesting interactive features to their maps. Besides this, TileMill is open-source and has all its code hosted in GitHub.
3. Geofeedia: Geofeedia is a very interesting new venture that searches social media based on a pre-established geo-location. For example, if you are interested in a particular neighborhood, you can use the tool to “geo-fence” the area of the neighborhood (by drawing a polygon around it) and it will start tracking the social media events geo-located in that area (Twitter, Instagram, Picasa, YouTube and Flickr). This is very interesting for understanding social media events taking place in a particular area. However, the platform is paid and not open-source.
4. Stratomap: According to its code repository, Stratomap is the open-source tool behind Google Crisis Map. It allows you to import a series of formats into its online platform driven by the powerful Google Maps engine. The code is open-source and it can be downloaded and hacked away to organizations’ particular needs. The challenge is that it requires somewhat of a high degree of technical ability to actually unleash the full potential of this tool.
[I didn’t include Ushahidi in the list (and its hosted version Crowdmap) due to its popularity, but it is almost certainly a must-have in every mapping toolkit.]

While the list above include heavy-duty, simple styling and technically-challenging tools, the idea is simply to start a process to make a relevant resource list, essential for the success of the Civic Maps Toolkit. However, these set of tools are merely illustrative in the universe of data analysis and mapping tools available out there. Maybe we should set a series of criteria to find the best combination of tools: which ones are the most accessible, which will match best the needs of grassroots groups and community organizations or which ones could adapt best to the large array of needs these groups and organizations might have?