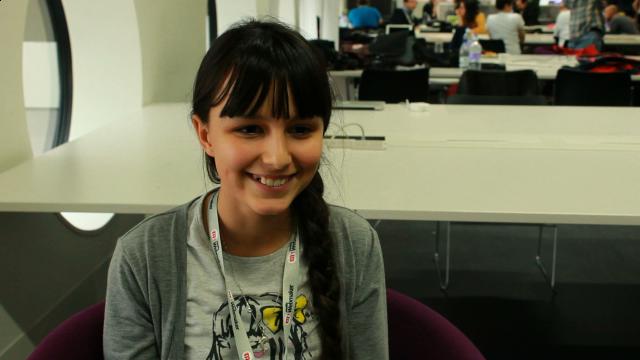 I’m here in London at the Mozilla Festival all weekend, where I’m joining Rebecca Mullen and Matt Thompson on the liveblog team. I just got to interview Alayna, who learned to make animated gifs for the very first time today and earned four Open Badges in the process.

I asked Alanya, who lives in London, if she knew about animated gifs before coming to the festival. “I have seen a lot of animated gifs on Google and I wanted to make an animated gif before, but I didn’t know how to do it.”

To learn how to make anigifs, Alayna and her grandmother joined Forrest Oliphant‘s session on using webcams to make stop-motion animated gif comics and publish them with Thimble. Here’s how Alayna describes it:

We got sheets of paper and positioned them. Then we put a webcam above the paper. We positioned the camera face down on the paper. Then we went to meemoo.org and took a lot of photos with the webcam to make the animated gif.

I really love Alayna’s animations, especially this one with a kitten and a mouse. Notice the variety of techniques she uses to create her stop-motion comic:

Alayna also learned how to use Thimble to publish her animation to the web. Because Thimble is part of the Mozilla Open Badge program, she earned several badges in the process: the hyperlinker, editor, Thumble Projectizer, and (my favourite), the codewhisperer badge. Alayna’s badges are automatically collected on the Open Badge Backpack, where she can share them on the web. Sharing things on the web is familiar to Alayna. She tweets at @kittycatalayna and already has 77 followers.

When we asked what she thought of the Mozilla Festival, Alayna described it as a fun event with lots of geeks in their 20s and lots of teens who are learning to make things on the web. And then she was gone, off to learn how to build hackable games.