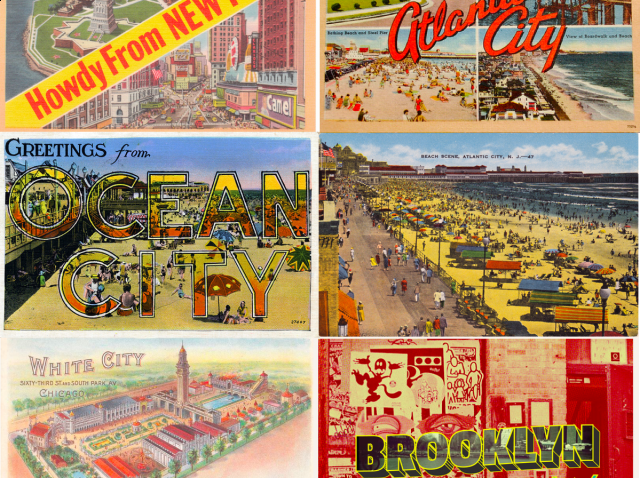 The first day of Antoni Muntadas‘ class, I couldn’t resist sharing my notes in tweets. “Dialogues in Public Space” was an intriguing title for an art course. There was a similar project called Civic Studio when I lived in Grand Rapids, where university students spent a semester doing what I thought of social process art—the output isn’t visual but a public service, inquiry or resource (i.e.: Viget, On the River temporary studio, etc.). It was the first time I had ever come across art as something that could live outside of a sculpture or canvas.

Our term project felt like an opportunity to explore a question, so bringing in my Civic interests, I wondered: Where does a postcard sit relative to a petition, a phone call or a letter when it comes to social declarations?

As a new Cantabrigian, I wanted to get to know a Cambridge neighborhood. I was once very involved in neighborhood life and worked closely with neighborhood organizations. My belief was that spaces are never neutral—they are reactive, and dormant spaces can trap the vitality of areas that surround them. Even privately owned spaces have a public impact. After talking to a few seasoned Cantabrigians, Vail Court surfaced as a property to explore. Through citizen journalist Saul Tannenbaum, I met Heather, who had been involved on a planning committee for the Cambridge Community Development Department. There were traces of Vail Court in City Council minutes since 2000, mostly requests for updates on the property. In 2005, there were plans to demolish the building and replace it with condominiums. For various reasons, that didn’t happen, and several years later, the property was declared structurally unsafe for inhabitants. After much research into the history of postcard petitions (scant since petitions went online), feedback from peers and community groups, and talking to Heather, I moved forward. Over a few stakeouts in May, I collected more than 50 postcards from passersby in a matter of hours. After sending an introductory letter, I’ve been sending two postcards at a time to the Washington-based owners.

But this is the clean and simple version of my last semester. Although the semester is over, the Postmarked project is still going. I hope the project will change hands from me to the neighbors. My original question about postcards transformed into a question about the parity between a public gesture and expectations. And then there’s the interactions in physical space, compared against what passersby ultimately wrote down on the cards. What do the neighbors actually think of Vail Court? Can community organizing really be considered art? Yes, I know about I wish this was. And did I mention that I was interviewed by a group of sixth graders for their newsletter?

Stay tuned for a series of more thoughtful write-ups. In the meantime, you can see outgoing postcards (published daily) at vail.postmarked.cc.