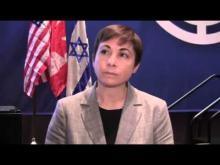 Miri Eisin is a former Colonel of the Israeli Defence Force. Her talk at MIT on the 2nd November 2015 prompted the question of how to fight the reification of victimhood narratives within the dialogues of protracted conflict situations and how to make room for emotion within our understandings of ‘rational negotiations’.

I went to the talk by Miri Eisin ready to be offended. Having studied conflict transformation and focused explicitly on Israel and Palestine, I was aware of America’s long-standing relationship with Israel – one that has recently been called in to question with President Obama’s historic nuclear deal with Iran. Movements in the UK, or at least in the echo chamber of my social media networks, seem to be pointing distinctively and unabashedly pro-Palestinian. Only last year Westminster voted for Palestine to have recognised statehood, with the vote 274 to 12. But America has a different international legacy to negotiate, and pro-Israel sentiments seem strong here, from the press coverage to the Presidential debates.

So I went in expecting the worst and came out with a conclusion I wasn’t expecting. Firstly, I guess that initial moment of being greeted by a warm and likeable human being is strangely disorientating when you go in ready to not like someone. Had I been expecting some sort of visual cue? An easily classifiable monster with horns and scales that would allow me to walk away with my suspicions confirmed and opinions in tact? Perhaps – we never know our prejudices until we are confronted with them.

And then, for me, Eisin’s talk really was about security. Or more, a chronic insecurity. It was a talk underpinned by the pervasive sense of existential threat that has come to define Israel as a nation of people under constant siege. Underpinned by the same insecurity that defines Israel’s reliance on America as an ally; that defines Israel’s quick defensiveness; its pre-emptive strikes. This insight didn’t make me angry, but instead put all my conflict transformation classroom learning into a new perspective – how do we reconcile narratives of victimhood with challenging dialogues? Where should the balance between dismissal and sympathy be? Can you be sympathetic to the cause and disagree with the action? How do you disagree without feeding feelings of isolation and defensiveness?

Eisin’s talk focused not on the Palestinian question as much as Israeli security in a war-torn Middle East. The recent history she recounted began with the Arab Spring but drew from inter-state relationships and rivalries that went much deeper. Eisin presented us with the view that the Arab Spring was the consequence of populations dominated by youth, unemployment and poor education. 52% of Egypt’s population was under 25, she tells us, 70% under 35. Unemployment for this age group is around 60%. Indeed, the youth crisis Eisin highlights has been flagged by UNICEF Egypt, with statistics to match. In Eisin’s eyes, the insecurity of the Arab Spring posed (and still poses) serious risks to Israel, with this view compounded by the border attacks Israel experienced over that period.

From this perspective, Egyptian’s newest President el-Sisi promises top-down securitisation, with projects like the New Suez Canal and New Cairo not only creating important infrastructure for the region but creating jobs and stability for the Egyptian people. But the question remains at what cost? Groups worldwide have condemned el-Sisi for his ‘flagrant abuse of human rights since taking office… pledging to restore stability’. Where Eisin characterises the Muslim Brotherhood’s rule of Egypt as particularly detrimental to both Egypt’s internal security and that of it’s bordering states, there are views of the Brotherhood that recognise more nuance.

The documentary film The Square provides a glimpse at the internal struggle the Egyptian people felt towards the Brotherhood, at times supporting it and at others drawing back from what felt like a push to centralise power. After the fall of Mubarak in 2011 the Muslim Brotherhood was legalised after years of being outlawed and won both the presidential and parliamentary elections. President Morsi was later thrown out by a military takeover headed by el-Sisi and many supporters of Morsi and the Brotherhood have experienced extreme brutality from the army at different points.

Eisin’s talk then measures the need for a new approach to Israel. Despite the Israeli Defence Force being considered the strongest military in the region, Israel still considers itself at the largest risk. The isolationist principles of national sovereignty and protectionism dominate Israeli foreign policy, including their recent decision to build a fence to keep out refugees from the Syrian civil war. You cannot counter such embedded insecurity without recognition: to attack Israel is to realise and reify their narrative of victimhood.

Towards the end of her talk, Eisin called out the news flow regarding the attacks that occur in Israel. Two stabbings today didn’t even break the news here, she tells us. She’s right – I had to find coverage on the Israeli online news source Haaretz. But there’s also no coverage of the daily Palestinian casualties. News flow is a chronic problem worldwide and the Western world is shielded daily from mass humanitarian crises, whether it’s the on-going civil war in South Sudan or kidnapped Nigerian girls.

One listener pointed this out to Eisin in the Q&A. How can she overlook the Palestinian casualties when calling out the lack of coverage for Israeli’s? The man who asked the question got very heated, and a woman behind me began saying, ‘Why start it? There’s one at every event…’ under her breath. Emotions run high in any debate of contesting narratives, particularly narratives symbolic of a group that feel existentially threatened. I realised today just how much they obscure us seeing the other side and how much we need to recognise them within discourses of ‘rational negotiations’.

So I left with a conclusion I had not been expecting: that in order to engage productively in these situations you need to be able to accept the other side fully as truth. Whether or not you agree or disagree, to instigate productive dialogue requires the first leap of faith in recognising what is real to them. Maybe what I’m talking about is empathy; but in it’s deepest sense. By legitimising the actor in this way, perhaps we can come closer to untangling the emotions that have embedded these narratives so deeply. It is only through this acknowledgement that we can fight the reification of narratives of victimhood and chronic insecurity that legitimise such violence as defence.