Can citizen journalism be an effective reaction to government censorship and political culture wars? Zeynep started asking these questions while researching Tunisia and Egypt during the Arab uprisings. Today she talks about the role of citizen media in Turkey. (vizThink by Willow Brugh. This post was written with Rodrigo Davies and Dalia Othman)

Here at the MIT Knight Civic Media Conference, our second day is starting out with a talk by Zeynep Tufekci, assistant professor at the University of North Carolina, Chapel Hill information school. Zeynep starts with the story of citizen journalism’s beginnings in Turkey.

A year before the Gezi protests,
Turkish military jets bombed smugglers between the Iraqi -Turkey border
on their routine smuggling run a year before the Gezi protests. 34 people died, most of them in their teens, mostly from one or two families. The Turkish media knew about it and they sat on the story, waiting on the government to tell them to report the story. The media censorship in Turkey is complicated, there is corporate media and media connected to the government.

One media journalists couldn’t take it and went to the scene of the bombing and the funerals, he was distraught and ended up reporting on the story via social media (instagram). After the reporter broke the story, it was a wake up call to a lot of the Turks.

Three students who wanted to change things created a group of citizen journalists after this event. They created a logo and set up a Twitter account @140journos (140journos website). The students practiced journalism by traveling all around the country, conducting interviews and reporting news (read Zeynep’s Q&A with Nieman Lab on 140journos).

Then the Gezi protests happened.

The protests happened as a result of gov’t plans to build an Ottoman barrack style mall in the one of the few open areas left in Istanbul (read Zeynep’s explanation of the protests). When the news media failed to report the story, the story broke over Twitter with calls for protests spread via social media.

#occupygezi became such a huge protest that CNN International began covering it live. While that was happening, CNN Turkey was showing a documentary on penguins. The penguin became a symbol of how crazy media censorship was, and protesters photoshopped penguins into photos from the protests. 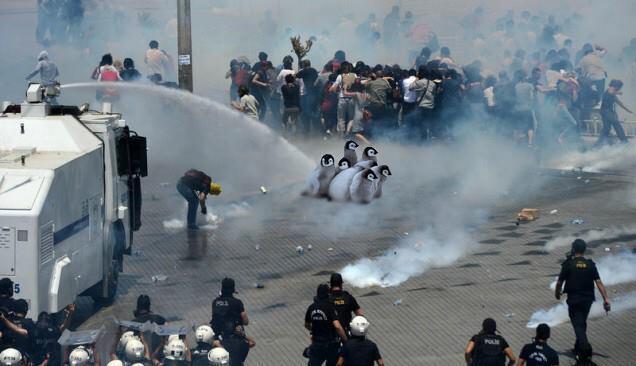 Penguin media vs non-penguin media became a symbol of the protests. Images of penguins inspired protesters and artists alike. “The revolution will be tweeted” was the mindset of many people.

What I found in Gezi Park: Citizen Journalism as Culture

When Zeynup went to Gezi and interviewed people she noticed a citizen journalism culture beyond just a small group. A wide variety of people would go to the front lines to report about the protests.

Zeynep shows us a photo of a famous transgender activist who sat in front of an APC and stopped it, hugging a Kurdish woman — who might not ordinarily have spent time with each other. In another photo, she shows two people crying, hugging, and consoling each other across cultural disagreements, a photo of revolutionary muslims praying, with socialist activists protecting them. Gezi was anti-cultural threat and it became a threat to the media cultural war discourse (read Zeynep’s post about pluralism in #occupygezi).

The government’s response to this cultural threat was to start a culture war. A woman claimed that 150 bare-chested leather pant-wearing men had cornered her, beaten her up, and urinated on her. The government offered no pictures and no testimony, even though it had occurred in one of the busiest parts of the city. It blew up against Turkish media and their coverage or lack of coverage.

One year later, CCTV footage was leaked of the woman walking down the street, unharmed. But in the meantime, the Turkish president had been accusing protestors of beating up women for wearing headscarves.

There are a lot of other incidents that were contested because of citizen media. Again this is not about censorship but rather creating a cultural war. Now because everyone can pick up a phone and take a picture can break censorship, but it’s different when trying to break the cultural war. In response, groups like 140journos shifted their focus from reporting to verification and counter-messages to the government’s culture war.

140journos faces a tough set of choices with each story: If you cry wolf and you’re wrong, then your credibility is damaged, but if you’re right and you don’t report it then people might die. This is the responsibility that fell on 20 year old students’ shoulders.

When reports appeared on Twitter claiming that a group was destroying shops, 140journos coordinated by calling their friends to get them to hold out their phones from their windows to verify false material. In a year of reporting, they have made one or two minor mistakes, which they corrected quickly. Zeynep argues that 140journos have one of the best infrastructures for verifying news, that is probably better than mainstream media.

At the same time, 140journos are continuing to do counter polarization reporting, they are going out of their way to report from different sides. They reported muslims praying in the old church site of Hagia Sofia that it would become a mosque. Although they’re not a religious group, they report everybody else’s issues and feelings, to counter cultural wars. In a political system where culture war is a key way to rule, reporting to each other from each other has become a massive political statement.

Many of the people from the village of Roboski, which was bombed by the Turkish military, have become citizen journalists. Ferhat Encu told Zeynep about a call from his father that his brother had died in the bombing. He got on the first bus in the morning, returning to his village in shock. The television in the bus didn’t report it — even though 30 people died, the military had bombed the village and there was nothing on the news. He felt angry and devastated at this omission.

When Zeynep interviewed a Kurdish person, he said that he initially didn’t empathize with the Gezi protesters, but that after he saw them beaten up, he started to empathize with them. Protesters in the park also told Zeynep that being treated as terrorists changed their view of the Kurds. Instead of just following Turkish news, they check Kurdish citizen journalism on the issue. Now 140journos is also reporting from Kurdish areas. The counter polarization that is emerging from citizen media is changing the country.

When Ferhat was arrested, his name trended on social media. My followers are my protection, he told Zeynep. He actually worried that if he ever stopped doing citizen journalism or lost his followers, he might be disappeared.

When a young woman jumped from the Bosphorous press, Turkish media published pictures from her jump. Her family, who objected, didn’t go to the mainstream media- they went to 140journos. Now people tweet to 140journos when they need something to be reported. Citizen media became this check on Mass media.

The reporter who first broke the Roboski village story started Vagus TV, funded by traditional sources, started a traditional online video news site. They raised funding for it. But it failed– they couldn’t make money, and the government censored them. Its creator gave up and is now a beekeeper.

Next Steps: Community Building
140journos has been developing new tools to create communities through reporting – creating a twitter app to coordinate volunteer citizen reporting to report the news. They’re testing gamification techniques to create exposure within and in between communities. They have no funding, they have to go to school, work odd jobs to support the work they are doing for 140Journos. They’re now no longer using the language of citizen journalism. In this counter-polarization work, they now talk about their work as community building through journalism.

The 140journos model is not sustainable, because there is only so much one can get from the youth. 140journos applied for a Knight News Challenge and were rejected. Zeynep argues that we need infrastructures for civic startups like the center for civic media and the Personal Democracy Forum. Our funding model of funding more guaranteed stuff is the opposite of what Silicon Valley does. We need to expand globally, to risky, unknown ventures — that’s where the innovation is occurring. It’s harder for scrappy groups to apply internationally and find the grant making language that supports success.

It’s a challenging funding environment. You cannot fund success. You cannot fund guaranteed projects. Failure and experimentation needs to be built into these things, and intake processes need to be adjusted to support scrappy groups doing great work.

Zeynep concludes by urging us to create a civic start up culture that would support groups like 140journos to do their great work better.

Dana Priest asks what the government’s reaction has been. Are recently imprisoned journalists related to 140journos?

Zeynep replies that the group hasn’t received direct government threats. They have been reporting carefully verified information from citizen journalists from all sides. Censorship in Turkey and Russia is often self-censorship by media organizations. The government sometimes jails journalists — but the greater problem is that no corporate media have free journalists. Industrial organizations sometimes buy out media and use it to gain favors with the government.

Since the group is mostly organized on Twitter, they aren’t as much a target to these forms of influence. The Prime Minister personally calls media organizations to complain about the ticker. (true story!) If 140journos were to make a mistake, they could be sued for defamation.

Istan from Romania: We closely watched what’s been going on in Turkey and how the government is using censorship, specifically cutting of twitter to stop the dissemination of information. How do they do it?

Zeynup answers: there are three ways to censor things. One model is censoring like China. If you’re China, you can control the messages that people post online. If you’re North Korea, you can shut off the Internet. Turkey can’t do that, since it has a highly effective e-government system. They’ve used the Internet to create infrastructure that makes life more convenient. Going after platforms like Twitter doesn’t work well. It slows down access, but people get around the block using a VPN. Since the Turkish government blocks porn sites, people are very good at circumvention. Instead of directly attacking Internet infrastructure, they start a culture war against Internet platforms. The Prime Minister goes on to television and demonizes social media. If the government’s base stays off the Internet, the government can keep people from accessing citizen media and thus continue its culture war.