This past weekend I attended CODE2040’s second annual Hack 4 Diversity, a weekend-long hackathon focused on addressing issues of diversity within tech. CODE2040’s summer fellows, along with some amazingly helpful and inspiring members of the broader community, spent the weekend working on projects to promote diversity in a sector that is still comprised largely by white males. Teams explored a broad range of challenges that minorities and women face along the path to entering the professional world of tech. While the by-products of the weekend are still in the early stages of development (hackathon style!), the ideas that inspired each teams’ work reflect some provocative and nuanced perspectives on “the diversity problem” in tech. Below I describe some of the great ideas that the teams developed over the weekend.

Transdocs is a  translation/editing platform that enables individuals to translate, edit and share technical documentation in non-English languages online. A text file can be easily uploaded to the Transdocs site, where an initial translation will happen using a free translation API. The user can then improve the translation by clicking directly on the document in the web browser, making and saving edits for the benefit of future users. The idea was born from the team’s desire to make technical documentation more accessible to non-native English speakers who are interested in learning to code. As CODE2040 fellow Christian Rodriguez explained, at his home university in Puerto Rico there are many students who are intimidated out of studying computer science because it requires strong English language skills. The Transdocs team took on this challenge by creating a tool that would take people beyond basic google translations by promoting crowd-sourced translations. Transdocs addresses a really important issue within the programming community: how do we promote communities that aren’t centered around the English language? I’m curious to learn if there are any other projects that deal with making code documentation more accessible to non-native English populations.

This team built an app-based platform that lets you curate photos from professional experiences and index them using hashtags associated with particular skills and professional themes. Employers can then use the same hashtags as a search tool in order to find people with the professional background they need. This team sought to create an alternative to the traditional resume by reimagining the ways we could categorize and index what’s valuable or “marketable” on the job market. At the end of their demo on Sunday, the team explained that the name for their project (‘One Thousand’) was inspired by the phrase, “A picture is worth a thousand words.” The team wanted to explore novel ways of displaying information about one’s career beyond what’s typically found on a traditional resume.Their project reflects a broader trend going on in higher education right now as companies like Degreed explore ways to capture and validate learning that happens outside of a formal classroom setting. The concept of “micro-credentialing” has grown in popularity in recent years as more people engage with online learning resources in order to develop new competencies and skills in their field. If micro-credentialing platforms gain traction, they could provide alternative avenues to rewarding careers for students who can’t access our current institutions of higher education, but who engage in other types of rewarding professional development experiences. 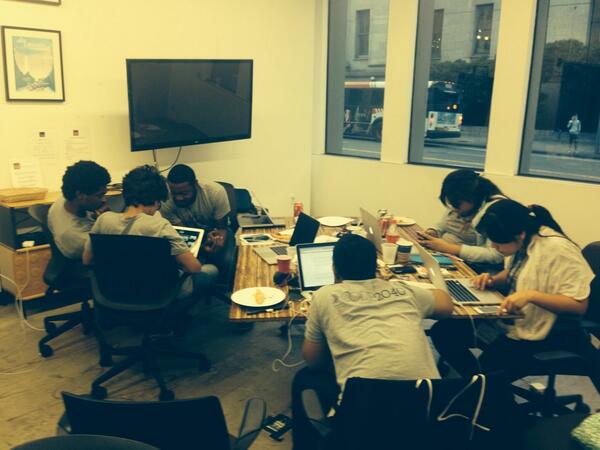 This team’s project was inspired by Debbie McGhee’s experiments in measuring implicit bias. In her research, McGhee asks people to make associations between two sets of images and positive/negative attributes in order to capture the hidden biases people have about certain groups of people. The Bias Analytics team wanted to create a similar experience that would enable recruiters and HR personnel to measure and understand their own biases in terms of race, gender and educational background. They created a site that pushes the user to make rapid decisions between two resumes with comparable credentials, but which varied along one of the three variables mentioned above. After a rapid series of comparisons, the site would provide you with a sense of your own biases. This reminds me of a number of other projects within the Center for Civic Media, such as Open Gender Tracker, which collects metrics that enable newsrooms to gain a better understanding of gender diversity within news publications. The promise of these applications is that they provide the baseline information necessary for people to become aware of their own biases and take initial steps to implementing more fair decisions and practices in their work.

TechFindr and Hacknight were two projects that sought to support a learner’s burgeoning interest in computer programming within communities where few people are involved in the tech industry. The Techfindr team created a mobile application designed to help people identify tech events in their local area. The project was inspired by the experiences of a CODE2040 fellow named Fidelis, an MIT undergrad from Zimbabwe who said that, though he was always interested in the STEM fields, he knew very little about computer science before he came to the States for school. His team wanted to facilitate the discovery of coding events for people who may not as easily come across such experiences within the communities they live. Similarly, the Hacknight team created a social platform that enabled kids to find collaborators for DIY projects in their neighborhood (like building a spaceship!). Even in neighborhoods where there are few other kids interested in, say, doing an Arduino hack, the app could be used to alert adults to a child’s interests and then used to create supports for that child to explore her interests more. As one of the fellows on the Hacknight team explained, “If you don’t have a pre-existing network, you don’t know how to find out more about these things.” Hacknight and Techfindr were built to address this challenge.

Dynamic was created to customize resumes for a particular job opening. This tool was specifically built for users who don’t have many people in their network who can help them craft and revise a winning resume. The team also created an optional, “anonymize” function which would allow someone to hide aspects of their identity, such as their race, gender, neighborhood, etc. on their resume. There is well-documented evidence that removing such information from resumes can decrease certain forms of bias during the recruitment process. This idea sparked some interesting debate at the hackathon. “I want people to know who I am. I’m proud of my name,” mentioned one CODE2040 fellow to me during the presentation. Others discussed the risks and alternatives to “white-washing” resumes: was this a helpful tactic for getting one’s foot in the door? Or was this a work-around to a much more fundamental problem that needs to be addressed head on? How do we balance assimilation with authenticity in these kinds of situations? I am interested in learning about more tactics that people have used to address bias during the recruitment and hiring process. Please share!

As you can see, theses teams touched on some of the most complex and challenging issues related to diversity within tech. Their projects reflect some of the awesome insights that we can gain from listening to minority students who are currently in the process of paving their own careers into tech. If you are interested in learning more about these projects or teams, please let me know and I will try to put you in touch with a the fellows responsible for creating this awesome work.