Last week, I was in San Francisco as a panelist and plenary speaker at the inaugural SHARE conference. The event was organized by Peers (a research partner in January) and SOCAP, and I spoke about the future of work. I also gave a lightning talk at the closing plenary. All of the plenary speakers had to bookend their lightning talk with “— catalyze the sharing economy.” I took advantage of this five-minute window to urge thoughtful discussion. This is the script that I more or less adhered to: 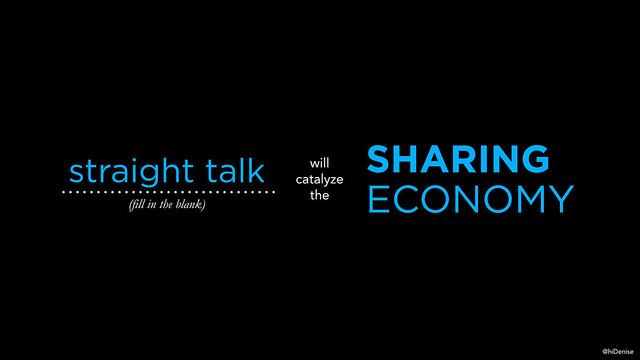 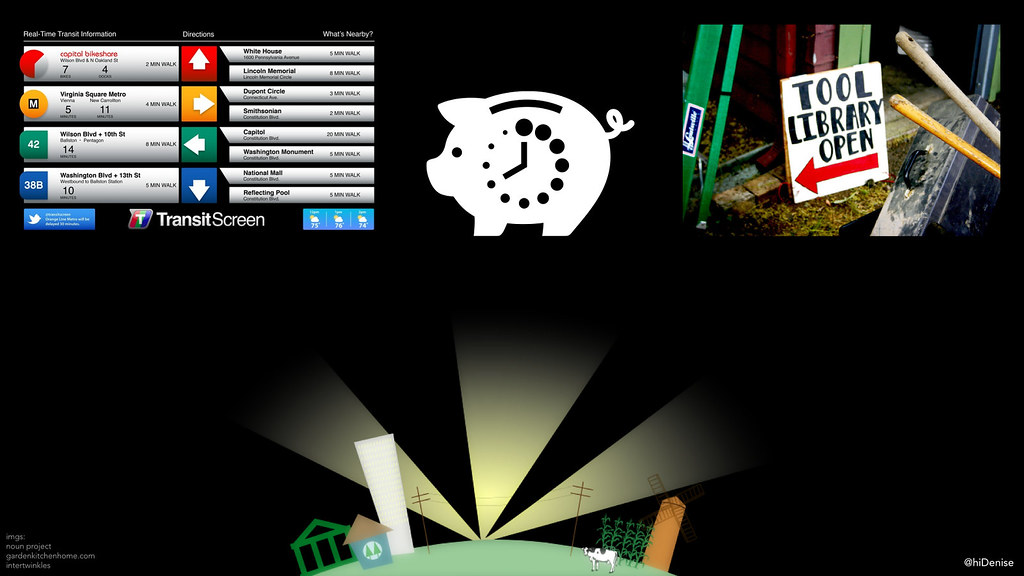 In the last two days, we’ve ran the whole gamut of “sharing.” And what do we mean when we say sharing economy? Broadly, we mean cooperatives. We mean co-housing, we mean credit unions. We mean smart transportation where it is just as easy to jump on a citibike, or hail a Lyft as it is to walk or take MUNI. We mean time banking. We mean tool libraries, where locals share their underutilized equipment. 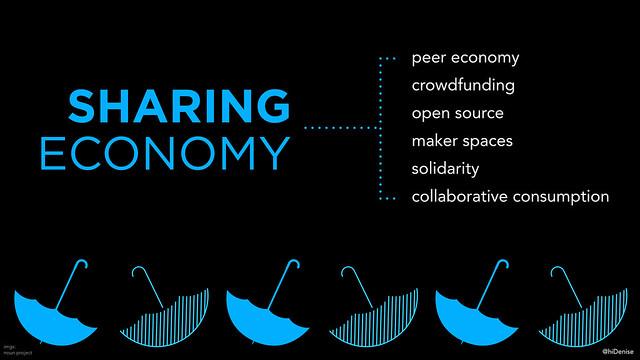 The sharing economy, then, captures a lot of different ideas: peer-to-peer marketplaces, crowdlending, things like Linux, Wikipedia, and DIY. In this sense, “sharing economy” is being used as an umbrella term. 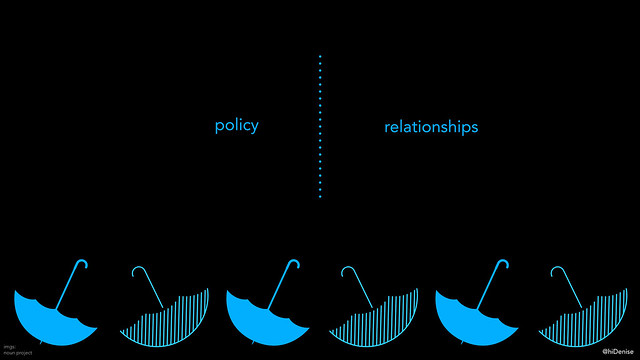 But actually, I’m here to say that I think we should be more considerate about how we use “sharing economy.” Now as I said earlier, I look at peer-to-peer marketplaces, which are often referred to on the national scene as the “sharing economy.” There are at least two major consequences for using the term “sharing economy” so liberally. One is on a policy/regulations level. The other is in how people and companies understand their commitment to one another. 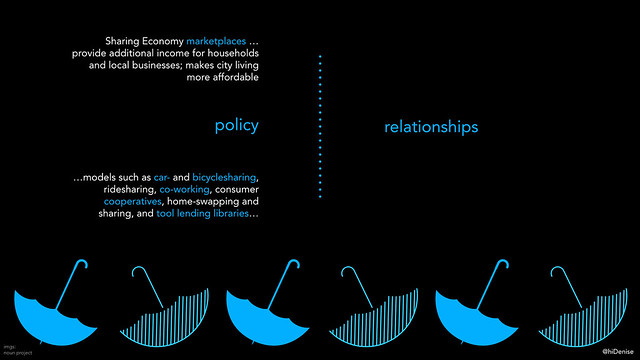 On the left here are two snippets from the shareable cities resolution. Last year, nine mayors pledged their support for this resolution, and in the same document, you see two different uses of the word “sharing economy.” One is technically a private business model, and the other are commons-based models like bike sharing, cooperatives, and co-housing. When it comes to policy, this means it’s unclear which models are under discussion. Either influential people will keep talking past each other, or we’ll get such a broad set of regulations that nobody will be happy. 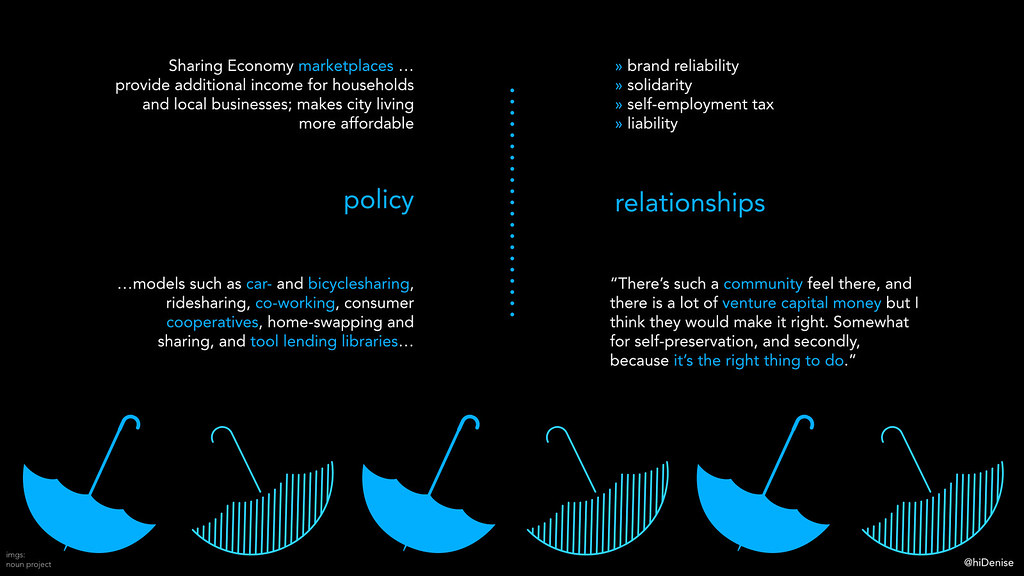 The peer economy is great because it’s a system of trust. Providers and companies team up to provide a quality experience, and providers can earn money on their own terms. Together, they’re building a great brand. This leads to a sense of solidarity between providers, and how providers feel about the companies. I’ve even heard providers refer to CEOs as “our CEO.” But providers are the front line when someone has to answer on a legal level. In Pittsburg and Wisconsin, police officers went “undercover” as Lyft and Uber passengers. When drivers came to pick them up, the officers fined them up to $300. Meanwhile, even if companies are able to build a place of camaraderie and openness, their ultimate commitment to providers is limited. This might be fair, and providers who realize this can be smart about planning. But terms like “sharing economy” are confusing when it comes to what each group thinks they are owed. Companies that embrace the term “sharing economy” are not necessarily committing to its suggested principles. 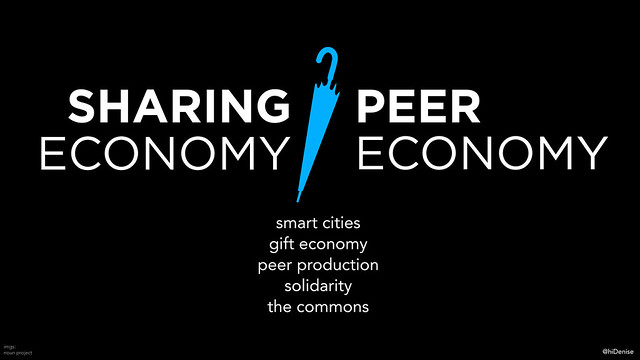 The reason I bring this up today is not because “to share” is a bad verb. I just think we need to be more specific if we’re really going to be productive; after all, this is a young space, which means there’s a lot of work to be done. And as Dr. Alexandra Samuel said in an earlier session, we only have a very brief window to get things right. Maybe as a collection of ideas, the term “sharing economy” could work, but when it comes to getting things done and having a sensible conversation, lumping everything under a term that is based overwhelmingly on interpretation doesn’t move us forward. After all, to some people, “sharing” could mean “shareholders.” It could mean Hertz or Avis or U-Haul, which share the same business model as Bixi and ZipCar. I’ve even heard someone say that loans are a way that banks and people collaborate to share risk. 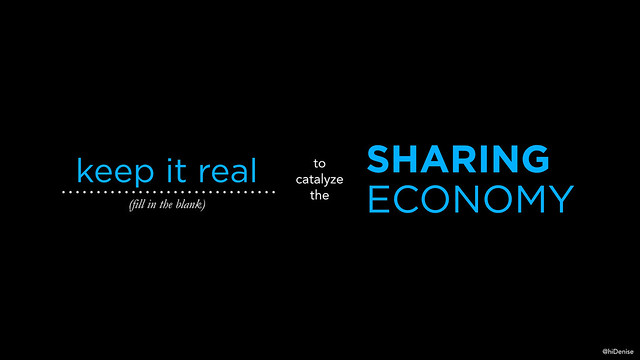 And so, when it comes to what you can do to catalyze the sharing economy, I’mma say “keep it real.” Be thoughtful about what you’re really saying. Once language confusion is out of the way, then we can really get to work.