I’ve been working on online tools for consensus for the last 2 years. Here’s what motivates me to work on this.

For my first five years in Boston, I lived in a housing co-op in Dorchester.  It’s a classic Boston triple-decker, which the 13 residents own collectively. That means that we didn’t have a landlord, but we were in charge of the mortgage, maintenance, utilities, and everything else. The house operated by consensus, and all decisions happened at weekly house meetings.

At one point, one of the three water heaters that serviced the house died, which left our main kitchen without any hot water. One of the residents (a well meaning, competent, and all around good person) took on the task of fixing this, and called up a plumber for an emergency job.  The plumber charged us the emergency rate; almost $2000 to install a new water heater, very similar to this model here, which rings in at $358 at Home Depot: 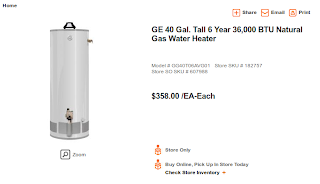 In retrospect, we needn’t have payed the emergency rate. We could have gotten by with only two-thirds of our water heaters for a week or two. We could have gotten a more energy efficient water heater that would have kept long term costs down, and we could have done all of that for less than half the cost. But the consensus process that could’ve allowed the house members to express their opinions was too slow, and we had no process in place to make decisions between meetings. Could we have had an effective consensus process that could respond to an urgent need like this? 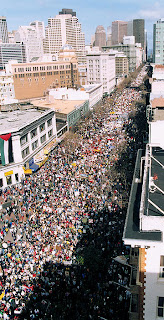 In 2002 and 2003, protests against the Iraq war erupted all around the world – some of the largest protests ever. Over a million people turned out in Rome, half a million each in London and New York, and over 200,000 people in San Francisco.

These protests, and direct actions that followed, were led by small affinity groups of 10 to 20 people who organized into clusters to coordinate their actions. My experience of participating in these protests demonstrated the power of small consensus-oriented groups to organize, motivate and mobilize people. This same style of small-group organizing formed the seed for Occupy Wall Street a decade later.

These clusters have tended to be short-lived, even as the issues they organized to tackle have continued to impact people. Is there a way to facilitate cluster organizing that is lower cost to the participants, so that the same power of coordinated autonomous groups can work even in times of peace? 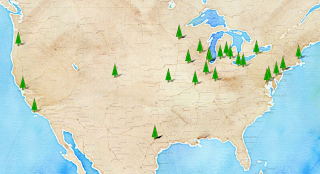 For the last 2 years, I’ve served on the board of an NASCO, an organization that supports housing cooperatives across the US and Canada. This professional non-profit draws its board members from four time zones, and with a miniscule budget, runs a conference, a land trust, an education and training network for tens of thousands of people, and a development consultancy that helps new co-ops to get started.

The board operates by consensus, and holds only a few in-person meetings and conference calls throughout the year. But when staff turns over or crises strike, it can become very difficult to maintain effective communication between meetings, especially when we lack the budget to fly everyone across the continent to meet. Could geographically distribute organizations find better ways to get work done between meetings, while still maintaining the values of inclusion, participation and consensus?

Consensus decision making processes have shown themselves to be extremely effective in encouraging full participation and equality in groups that practice them. But they’re less functional in times of urgency, at larger scales, and in geographically distributed contexts. Can we meet some of those needs while staying true to the values of participation, democracy and understanding?

InterTwinkles is the culmination of my work on so far on these questions. It is a collection of light-weight tools that groups can use for brainstorming and decision making, and inspired by the effective in-person tools that already exist. I hope you’ll consider trying it out, and joining us to help build a resource for all types of co-ops and democratic groups.