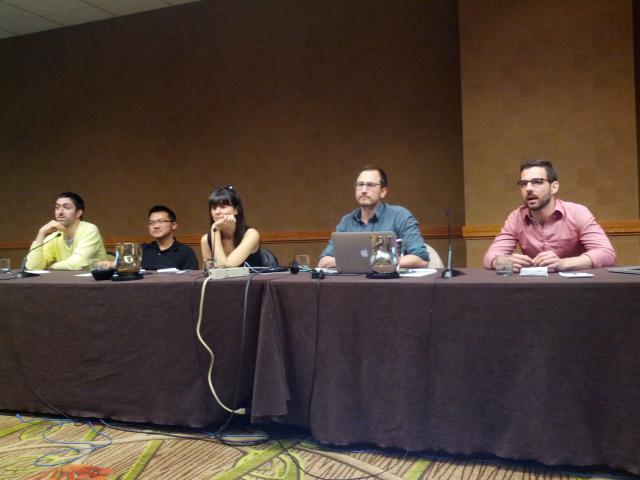 Josh Levy, Internet Campaign Director at Free Press, introduces the topic. The SOPA protest was the biggest online protest we’ve seen. Millions of people participated and made a real impact. For organizers who have been fighting on open internet issues, it was exciting to see so many people take action and recognize that the internet is something you have to proactively protect, or else the openess that you know and love and maybe didn’t think about before could go away.

An alphabet soup of bills and meetings have followed in SOPA’s wake (CISPA, ECPA, CFAA, WCIT and FISA). We’ve had to learn what they mean and figure out how to leverage this newly engaged network to beat back the bad bills and support the good bills and educate the public on why the open internet is so important.

Holmes was encouraged by the fact that everyone, from individuals to companies to organizations, did something, from changing Twitter avatars to website shutdowns. Within a few days, it was apparent that the bills were to be shelved, and the event had put a crater in the years-long lobbying push by the studios. It reset the rules for how Congress and policymakers around the world treat the internet.

So who led this response?

Elizabeth Stark says that the story in DC is still that this movement was orchestrated by Google, a fundamental misunderstanding of how the internet and online communities work. This is the easy answer to put in a news story, but not exactly true.

Elizabeth’s ways that SOPA was different: SOPA was a meme, so people made it their own. It was decentralized and chaotic. It was a big tent of conservatives, liberals, startups, academics, and big corporations. The expectation that money will buy you laws in government, and the movie studios had an order of magnitude more money, but SOPA had people. 18 million or so.

Mark Stanley’s basic breakdown of how to use your influence to reach Congress and the presidency: 1. money, which buys access (when you hire their friends)
2. expertise, which lobbyists can convey
3. public opinion – This is what the SOPA movement leveraged.

Policy is incredibly complex, and many members of Congress will willingly admit they don’t understand policy. This limits the role of expertise in swaying votes. Policymakers need political incentive to act, and making it easy for them to interact with public opinion is a clear way to do so.

One way people participated in the SOPA movement was by creating tools to make it easy for others to have their voice heard. Of all the activities they did, Holmes attributes Fight for the Future’s day of action, American Censorship Day. The action asked everyone with a website to install a drop-down banner script. They agonized over which headline would rocket the link to the front page of Reddit. The idea that we could collectively shut down the internet for the day took on a life of its own. Reddit badgered the site’s administrators to set a date. Holmes is amazed at the degree to which you can make a plan with friends and watch it take a life of its own.

Elizabeth points out that the SOPA protest community adopted open source communities’ norms – it was open, and fluid, and anyone could join to help.

CISPA and other bills have been stalled, but they’re back again like zombies. SOPA now refers to the reaction to the bill moreso than the bill itself. In DC, it became a verb — “Will this get us SOPAed?”

But it’s unlikely that future assaults on the open internet will be as brazen and easily-defined. Reporters are always asking if new bills are the next SOPA, and organizers must restrain themselves.

Mark is heartened by the fact that 40-50 calls into a Senator’s office on one day can make a difference on a bill, and sees this as an opportunity.

How do we maintain the momentum of this victory? Holmes points out that they’ve started the Internet Defense League, a group ready to react to legislation that threatens the internet, or proactively work to improve the internet. This way, we won’t be starting from scratch the next time around. The network is more densely connected.

The movement set the tone for advocacy more broadly by showing that occasionally, a groundswell of the public can actually win legislative battles against monied interests. A startup guy with no political organizing background started the We the People petition to allow unlocking of cellphones. The petition reached critical mass and created an opening in civil society to push this issue, and groups that work on these issues have reacted to support the work.

Tim says the team at Mozilla wants to be proactive around these issues, and not rely on the booms and busts of public engagement.

What does internet freedom even mean?
It can mean freedom to innovate, or net neutrality,

Holmes says the internet is built for expression, and the fights to defend online communities, startups, and online art are all fights to protect that expression. The two genres of attacks on the open internet are blocking and spying. Both go after our ability and safety in expressing ourselves online.

Tim introduces Maslow’s Hierarchy of Networks:
1. Do you have access to the network?
2. Can you hack and change the code of the network?
3. Can you express yourself on the network?

Josh asks, if the web wasn’t invented by Tim Berners-Lee, would someone else have invented it? Maybe not. We have this radical engine of self-expression and we need to protect it.

Holmes hones in on the fundamental trust people have for the truly open internet: it’s threatened BECAUSE it’s so good. The difference between the internet and cable channels is clear to many of the people who took action.

Tim explores the tension between the times we do want to analogize the internet to the brick and mortar world, and those times we don’t. On one hand, law protects our physical postal mail in ways that Congress has refused to extend to digital communications. On the other hand, Congress can get hung up on the analogy of a physical CD being stolen rather than learn the nuances of ideas like temporary copies. Analogies can be powerful, even if they’re not entirely accurate.

Proactivity?
Holmes argues that a legislative strategy of “just stop the bad stuff” could be enough and leave us in pretty good shape. People will continue to innovate outside of DC and produce technologies that are impossible to decrypt and impossible to spy on. He believes in this strategy “not 100%, but 90%.”

Holmes warns us against trade agreements like TPP that lock us out of improving laws.

Biella asks if the internet is perfectly configured as a big surveillance machine, given that the tools for encryption suck. And how would you frame this as a public campaign?

Mark points out that a majority of Americans don’t feel any harms from the daily surveillance occurring against them (with many clear exceptions). We also don’t understand how it actually works. Unchecked government surveillance is a very real problem, he says, but it can be hard to wake people up to it.

Holmes is working on this exact question. The DoYouHaveaSecret site shows users how creepy this spying is. It has to be visceral. Or, Tim suggests, we can campaign by catastrophe. This works in lots of other issues, if you’re able to leverage that moment when it happens. Unless, Mark argues, things have gone too far and it’s too late.

Elizabeth asks about corporate data collection: what about when our data giveaway comes with a cool Facebook app?

Apparently there are TV and film producers interested who could help visualize these policies in action. [Although, look what they’ve done with ‘hackers‘].

RapLeaf‘s harvesting all of our information and building profiles of us for sale. It’s creepy. Or maybe it’s cool, if the Obama campaign’s using it for field organizing. But there’s zero transparency and we don’t have control over it.

Josh argues that Chrome makes it difficult to opt out of third party marketing, because it’s run by Google. Firefox is rolling out a version to facilitate opting out.

Mark harkens back to the cryptowars of the 1990s that allowed encryption to be legal for these tools to work in the first place. The policy framework should gaurantee us our basic Fourth Amendment rights — we shouldn’t have to rely on workarounds.

Q: Most of our communication takes place on private platforms, and like in a shopping mall, they can kick us out.
A: Matt, policy guy at Free Press, says we shouldn’t need workarounds, but we often do. The Supreme Court has already ruled on this, but it’s up to the FCC to implement.

Free Speech vs. Free Beer
Responding to a question from the audience, there’s a longstanding debate, Elizabeth says, about whether people get behind open internet policies because they don’t want to pay for things. And there are alternate models of cultural creation that don’t rely on the exclusivity that copyright originally provided.

Should we organize against internet companies?
Q: Founder of OpenMic asks: The focus has been organized against government — what about organizing against Amazon or Facebook? Amazon handles 70% of the cloud. Big shareholders will recognize risk if we create it for them.

Elizabeth points out the backlash against GoDaddy in the SOPA battles. Corporations have transnational power to make decisions in an almost extra-governmental manner, and we haven’t yet fully realized our ability to influence them.

Holmes points out DemandProgress’s Google Quit the Chamber campaign. And they’ve organized against Facebook’s support of CISPA. But the obvious ones — the cable companies — everyone hates anyway.

Q: Do we have any notable allies in Congress?
Josh says that no one party is great on the internet. Holmes says the Republicans were more important in defeating SOPA than Democrats were. Elizabeth shouts out Jared Polis, House internet champion. Moran, Lofgren, Wyden, and Issa (on SOPA). Wyden’s hold bought us the time we needed to defeat SOPA. And Ed Markey, Senator Leahy (despite his work on Protect IP, he’s introduced legislation to force police to get a warrant to access our online communications). Some members of Congress are great on privacy and terrible on copyright, or vice versa.

Q: What are you doing to stop CISPA?
Holmes: CISPAisback campaign site. Campaign to get more companies off the fence, to speak out against the bill. Get companies with good privacy policies to stand up to the government undermining privacy policies.
Mark: It’s going to committee next week, and then a floor vote. Go to CISPAisback, EFF, DemandProgress, and join these actions.