What do you call a cross between Tinkertoys, K’Nex, Gears, wooden blocks and a plastic boat? My friend Eric Rosenbaum and I are trying to find out. We’re inspired by Golan Levin and Shawn Sims’s Free Universal Construction Kit, which allows anyone with a 3D printer to connect previously-incompatible construction toys. We love that Golan and Shawn released his designs with a Creative Commons license, but 3D printers remain far too expensive for most poeple.

The Toy Interface Construction Kit Learning Environment (T.I.C.K.L.E.) is a universal construction kit for the rest of us. It doesn’t require 3D printers or CAD skills. Instead, we’re using Sugru, a self-setting rubber material invented by our friend Jane. When we told them about the idea, Jane and James sent us some extra Sugru to try it out.

Over several weeks, Eric and I collected a basic set of construction kits: TinkerToys, Gears Gears Gears, wooden blocks, Zoob, and K’Nex. Some of the kits were new to us, so we played with them in the evenings to learn what they can do. Then on Monday, Eric and I started building in earnest.

This robot was my first attempt to use Zoob, Tinkertoy, and blocks together. It matches my tendency to explore design through narrative, structure, and form: 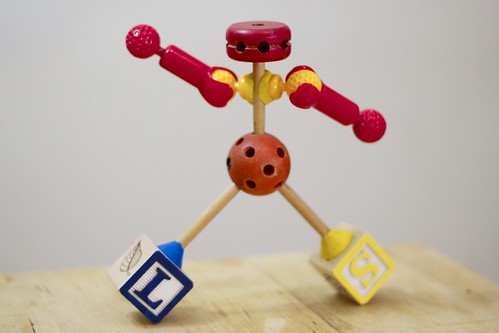 Eric creates music-making technologies, and he has a wonderful ability to move between his imagination and hands-on making. His first TICKLE design attaches K’Nex to gears and a pipe cleaner to play wind chimes:

Creating a TICKLE object is easy. Open a packet of Sugru, making sure your hands are washed. Break off a piece and roll it around your fingers. Then simply press the Sugru in-between the parts you want to connect. The Sugru should set in 24 hours, but it’s good enough for gentle testing in a quarter of that time.

(We estimate that one shipment of eight 5 gram packets Sugru is enough for 30-40 toy interface connections. This amounts to about 55 cents per connection.)

If you’re impatient (like us!) it helps to make your parts the night before. We wish it set more quickly!

What we learned from TICKLE

Combining construction kits brings their differences into focus. For example, while it’s obvious that wooden blocks are good at balancing and K’Nex are good at structure, it’s less obvious that blocks work better close up while K’Nex work well at distance. We unsuccessfully tried several designs before finding areas where they work together well: TICKLE makes cantilever designs possible with wooden blocks. Amazing! 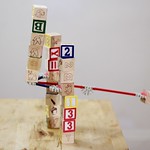 Eric and I imagined the TICKLE dragon very early. Zoob, with its ball and socket joints, is great for making flexible spines. Tinkertoy is well suited for the angular webs of a dragon’s wings. We had to try several designs before we found something that could stand up on its own. 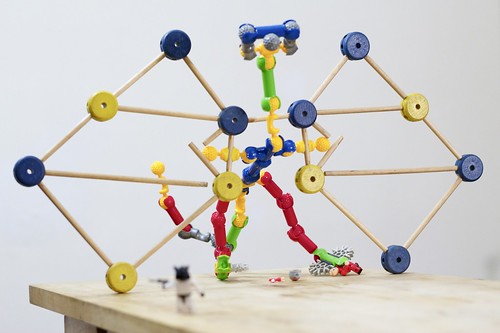 For me, the story of TICKLE combines three powerful principles I have learned in my first year at the Media Lab:

Joi Ito often encourages us towards networked creativity, using the power of pull to do projects that are smarter than any single person. TICKLE is a great example of networked creativity. Firstly, the project is inspired by the Free Universal Construction Kit. The idea for Sugru came in London during a chat with Nicky Smyth of BBC research. Eric and I also know Jane, the inventor of Sugru, through the Awesome Foundation London. Back in Boston, I sent an email out to a Media Lab mailing list for spare parts. A steady stream of colorful objects arrived in my office all the next week, with one alum making a special trip to share some of his toys.

Mitch Resnick often says that one of the best ways to learn is by creating and sharing things that follow our passions. Golan and Shawn’s designs are inspiring. Conversations with friends are fun. Ultimately however, Eric and I learned far more from actually making things with TICKLE. Until then, our answers to the “why?” and “how?” of toy interfaces were merely imaginative speculation.

Eric and I both believe in the power of media to inspire creativity. The advantages of good networks and the insights of personal creation are more meaningful when we share those things with others. That’s the vision behind Eric and Jay’s MaKey MaKey, an invention kit for everyone. Sugru also encourages creativity with media; their beautiful website features a wonderful gallery of hacks and repairs. To encourage others to create and share, we have made TICKLE easy and inexpensive. We also hope that our examples inspire you to create and share your own TICKLE creations on the web.

Here’s what we made. What will you make?

Have you used Sugru or any other adhesive to connect incompatible construction kits? Link to it in the comments; we would love to see what you make!