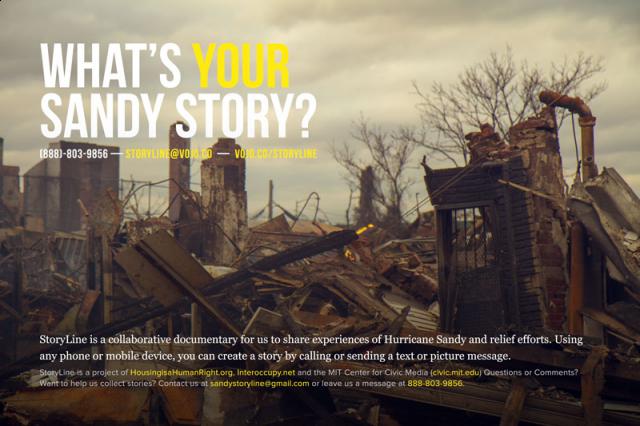 It’s been nearly 3 weeks since Hurricane Sandy hit the Eastern seaboard and there are still a vast number of people without power, without water, without hot food, and without a home.

Housing is a Human Right (HHR) is a storytelling project led by Michael Premo and Rachel Falcone that has worked for the last five years to connect people around housing, land and the dignity of a place to call home. HHR storytelling follows a tradition of oral history and stories are richly captured and shared in multimedia including audio and photographs. They truly create space for people to share stories of their community and ongoing experiences trying to obtain or maintain a home through exhibitions. They have transformed laundromats and empty stores into storytelling spaces, and create storytelling space on multiple platforms including radio and internet.

We have been speaking about how HHR can use Vojo as another method for gathering and sharing stories. Michael and Rachel introduced themselves to the Vojo Community on a call a few weeks ago (blog post recap) and explained that they work with many people who don’t have internet access and Vojo would make stories and story-sharing accessible for these folks. At that time also, they expressed an interest in being able share stories via Vojo and received on Vojo across multiple platforms and in a way that is consistent with the spaces they create.

Rachel and Michael participate as organizers in both the human right to housing movement and the Occupy movement and when Hurricane Sandy hit New York, they went out with others, many friends and fellow occupiers to see where help was needed. Michael began helping to set up hubs to meet immediate needs of communities right after the storm and to fill gaps where city and federal services were limited or nonexistent. Rachel brought her recorder to Red Hook, Brooklyn, and spent the day at a newly created food and distribution hub at Red Hook Initiative (rhicenter.org) sitting with people she met and talking to them about their experiences of the storm.

When she posted the Red Hook stories online on HHR’s website, we saw an opportunity to use the Vojo platform to also share these stories–and that’s how StoryLine started. We quickly realized the potential of inviting people who were being underserved all across the city and who may not have internet access to tell their own stories. We also realized that the project needed to be more expansive than just housing and named the project with the intention to serve as both a phone line to call in stories and also a platform to tell a different kind of storyline about Hurricane Sandy. We set up a group for StoryLine and Rachel developed and recorded custom prompts to invite people to share stories about their experiences of Sandy.

Building a team and story space online
Two needs emerged early — Rachel wanted to be able to share the content in beautiful, easily shared ways, and to organize and coordinate a growing number of media makers who were already starting to facilitate the telling of these stories. Laura Gottesdiener, a writer and author of the upcoming book A Dream Foreclosed joined the StoryLine effort last week and the team has now grown to several dozen collaborators who have now signed on to help with the project.

StoryLine has also developed partnerships with InterOcc which is organizing the web coordination for Occupy Sandy who is featuring StoryLine here: http://interoccupy.net/occupysandy/storyline/. They also have formed a partnership with Occupied Stories (http://occupiedstories.com/), who are already telling first person stories from the Occupy movement.

Interocc, mediamakers, and organizers quickly began asking where this content will live online and how it will be integrated into their sites and WordPress in particular. So StoryLine developed partnerships with SoundCloud for sharing the audio of the project and Cowbird (http://cowbird.com/) for sharing these stories online in a way that prioritizes first person storytelling and creates the space for deeper storytelling than is possible through social media. We connected Rachel with Eric Nguyen, a friend and software developer at Google who got in touch looking for ways to assist relief efforts. Eric is now working to design a way to show Vojo content in a beautiful way on WordPress sites, the goal is to create something generalizable that can become a Vojo-Wordpress plugin.

What’s next
StoryLine is set up and you can call (888) 803-9856 to hear stories and to leave your own. This weekend, I’ll be joining Laura, Rachel, and Annie from Cowbird to host workshops and street trainings on using both Vojo and Cowbird. The goals of these workshops are:

We’ll be in Brooklyn tonight, if you would like to join for a workshop on StoryLine, Cowbird, and Vojo, find us at: 5:30pm at St. Jacobi Church, 5406 4th Ave, Brooklyn, NY. RSVP hay AT cowbird com

If you are interested in speaking with Rachel and Laura about the project, you can reach them at: SandyStoryline AT gmail