Phew! The second day of the Mozilla Festival is coming to a close. Exhausted-but-glowing makers are now sitting down to watch the plenary session, led by Mark Surman and our energized facilitator, Allen Gunn. Someone hook a generator to the man!

Our first speaker is James Whelton, who tells us about CoderDojo, a global network of clubs around the world where kids learn to code. CoderDojo has 130 clubs internationally, with around 30-40 kids of ages 8-18 per dojo, with between thirty and forty percent girls. At different Dojos, it’s possible to learn HTML, javascript, node.js, game development, blogging arduino, and many more. At Dojos, young people also make friends, learn problem solving skills, ask for advice, collaborate, and show off what they do, in an environment that nurtures their creativity. Progress through dojos is managed through a system of belts.

Dojo does things differently than some other coding clubs. Dojo participants 12 or under bring their parents. Sessions prioritize self led learning in a relaxed atmosphere. Dojo tries to keep money out of it and doesn’t charge for participation. They have also worked in partnership with groups like Mozilla Webmaker, Rails Girls, Code Academy, Young Rewired State, and Code Club.

James points out that around the world, industry, academia, and communities themselves recognise the value of learning to code. But why have physical learning centers? While Internet resources are readily available, adults often don’t know where to point young people interested in coding. They might also end up in an unhelpful corner of maker communities. Dojos offer a friendly point of contact for those who want to get started.

James argues that learning to code is about empowerment, about the ability to create a few lines of text that can change the world. James reminds us that code is more than just code: it engages with social, economic, and educational aspects of life. He tells us the story of Sally, who lost her dog Rufus. Her parents might suggest that she put up a sign listing her phone number. If Sally knew how to make a web page, she could include a link in her poster which shows a map of all of the reported locations. Not only might she find her cat, she will also learn how to organise online.

Mark Surman praises James for a particular kind of leadership that reflects many in the community. James developed CoderDojo just by doing it, by getting started. At the #MozFest, the Hacktivate Learning sessions bring together a conversation about how people can develop this kind of leadership and support learning in their communities.

Mark Boas, who worked with Al Jazeera this year, talks about breaking media down into its component parts. During the American presidential debates, Mark created an interactive tool that audiences could use to search, analyze, and share data from the debates.

Cole Gillespie, who worked at Zeit Online, talked about finding new ways to look at how stories are being shared in the social world. His node.js project amo collects information fron Twitter, Facebook, and GooglePlus to aggregate social media data on how far a link has traveled on social media. Cole then shows us an experimental newsreading app which uses the data. (I also used amo for my work for the Guardian Datablog on gender in the UK news)

Laurian Gridinoc, from the BBC, shows his work to map the UK election in 2012. He then shows us a beautiful 3D interactive to illustrate the story of Ian Tomlinson’s Death.

Nicola Hughes tells us about her work at the Guardian. She shows us a fascinating story on the large companies benefitting the most from US government contracts for food aid. Nicola wrote software to track information on all of the contracts, where the food was shipped, and where it landed. Using a combination of traditional journalism and data journalism, they showed that although the US government claimed that food aid benefits small business, the money mostly goes to large corporations.

Dan Schultz at the Boston Globe (and my colleague at MIT), talks about Opened Captions, a project which opens up closed-caption data into a web-hackable stream. He imagines future work on a network of translation servers for television captioning. 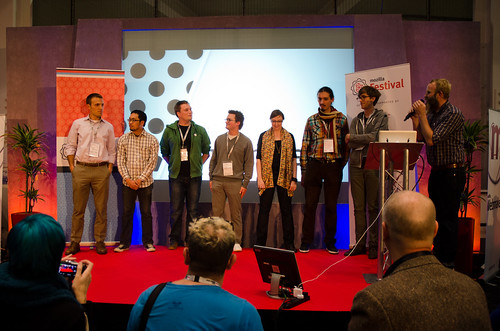 Next, Dan Sinker introduces the new Open New Fellows and the expanded group of news organisations that are involved this year ( meet the Knight Open News Fellows 2013 ):

If we care about webmaking and a connected society, we need a way to communicate what those values are. We also need to connect the people who are learning things and contributing. Mozilla Open Badges tie together that story. Erin Knight gets on stage to tell us about Webmaker Badges. She shows us a photo of Elena and the animated gifs she made today (I interviewed Elena earlier today).

Erin asks Elena about the badges that she learned. “It was cool. It was awesome,” she responds. Next, Erin introduces Jason and James. “It’s addictive. Once you get a badge, you have to get another and another.” James adds, “It’s something to collect; it’s good.”

Erin tells us about the Webmaker Badges program. Badges recognise the types of learning that Webmaker cares about, while also setting out pathways through a broader learning universe. Webmaker Badges come in two flavours: skill badges and participation badges. These badges also help people build community, find mentors, and tie that together into a larger story of learning.

Badges in Webmaker are a form of automated assessment. Thimble follows how you’re doing and awards them automatically. Erin illustrates this by showing us a demo of how badges work in Mozilla Thimble. Using Thimble, she edits a web page to add a link to the page. When she mistypes the HTML, Thimble tells her. Then, when she successfully adds a link, Thimble will automatically award her the “Hyperlinker” and “Image Maker” badges.

Webmaker Thimble is just the beginning of the experiment. Mark Surman thanks the MacArthur Foundation and other funders for supporting Mozilla’s broader initiative to use badges to tell the story of open learning and connect the people who teach, learn, and care about making on the web.

Finally, Mark Surman offers encouragement for Sunday, the final day of the festival, urging us to move our projects to a finished state so we can have things to show. At the end of the festival, we’re going to have a demo party. Participants should let the info desk know about any projects that should be included in the final demo day.