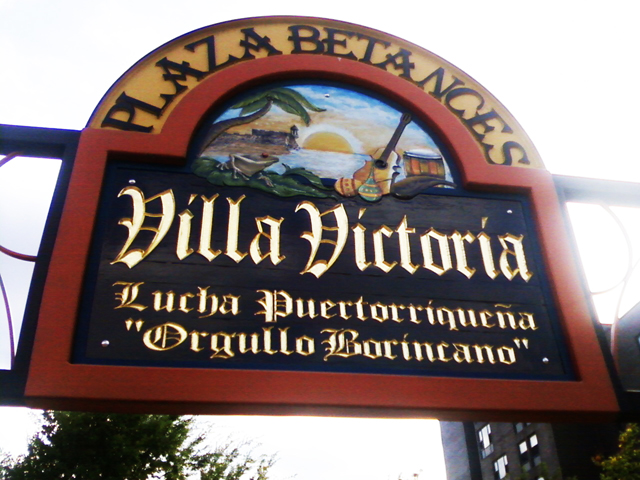 This summer, a groundbreaking virtual meeting took place between two organizations dedicated to social justice and community empowerment: Los Angeles’ Vozmob and Boston’s Inquilinos Boricuas en Acción (IBA). In a previous blog I mentioned being a summer intern with Vozmob, a mobile phone blogging platform for low income day laborers and workers that is managed by IDEPSCA. Boston’s Inquilinos Boricuas en Acción, represented at the digital meeting by Executive Assistant Omar Dauhajre, is a community building organization dedicated to “increasing the social and economic power of individuals and families” (more). Also at the meeting was MIT graduate student Jenny Barrios Berlin, who is involved with a collaborative design documentary film project with the Villa Victoria neighborhood in Boston’s South End. Credit must be given to Center for Civic Media Community Organizer Becky Hurwitz, who initiated introductions between all parties involved in order to make the meeting a reality. The purpose of the meeting was to consult the Los Angeles based Popular Communication Team at Vozmob about setting up a mobile blogging group in Boston.

Using Google Hangout, representatives from Vozmob were able to communicate with Jenny and Omar, who were speaking on behalf of IBA. Jenny describes herself as a first generation Latina from Washington DC, who, upon arrival in Boston, was curious to uncover the history of the segregated city and also to find a Latin American community. This is how Jenny found Villa Victoria and came to be in touch with IBA. They welcomed her with open arms, and she began to learn about the history of the site, which emerged from a struggle for community preservation in the 1960’s. In her own words, “as Latin American communities, we should look to communities like Villa Victoria where spaces are created and maintained for the benefit of those communities.”

Jenny would like to use mobile blogging platforms, like Vozmob and Vojo, to document the daily realities that occur in places like Villa Victoria. Another way that these realities have been documented is through a film project. Jenny and her team have recorded 11 hours of footage, and their current goal is to put out a 2 minute trailer that will be used to get more funds for the documentary project. The ultimate goal is to create a feature length film that covers the past, present, and future of the Villa Victoria Neighborhood.

During the course of the meeting, several members of the PCT were able to share their experiences with mobile blogging. For example, Luis Valentan from the PCT said, “Every organization transforms their constituents. Many of these organizations remain in the shadows, and it is important to have that work known to others everywhere. We must take our projects and ourselves out of the shadows, like we do with Voces Mobiles.” Luis also recalled his experiences in the South West, where he met many people in Arizona that have felt displaced by their struggles. These difficulties have led to alliance building and solidarity among groups with common goals. Luis says, “There are no nationalities in our struggle. We are all the same and should work together.” Luis also spoke about how inspiring the history of Villa Victoria is, especially how a small neighborhood was able to make such an impact in Boston. Omar Dauhajre from IBA agreed with the idea of working towards common goals among communities with similar struggles. In fact, one of the objectives of Jenny’s collaborative documentary project is to share and link Villa Victoria’s struggle with other communities, especially other Latin American communities.

In addition to sharing experiences concerning media practice, the PCT, Omar, and Jenny were also able to discuss the different options for collaborating with Vozmob. Vozmob organizer Pedro Joel explained how the PCT must vote in order to create affiliations with other organizations, and he also covered how content is posted to the site. For one, assigned administrators can edit and manage content on the site. Vozmob aims to create less filters for bloggers and avoids content censorship, especially by providing guides for bloggers. For implementation on the IBA side, Omar suggested creating a committee that meets regularly in order to keep any prospective mobile blogging project going.

A very interesting topic was also discussed concerning media literacy and generational divides. Omar explained about a training that happened in Villa Victoria among elders, where people were given cameras to use and there seemed to be a media literacy divide. Omar proceeded to ask Madelou, a member of the PCT and a regular Vozmob blogger, about how she overcame this divide. Madelou explained how it took her a long time to embrace the technology. She lived many years in Mexico even without a landline, so a cell phone just seemed to be an unneeded luxury. Yet at her 65 years, Madelou was able to learn how to embrace this technology, which she says is forced on consumers, for the good of her community and of others. Madelou says that instead of seeking charity, she wanted to use whatever resources that she had to drive social change. She stated: “[With Vozmob] I now have the opportunity to open a small window to the world and say, ‘hey, I don’t like that!’ With these tools, we can share with the universe.” Tools like Vozmob have indeed created gateways to new forums for discussion, even beyond the web. For example, Pedro Joel spoke about how Vozmob represented the US at the United Nations and won the Empowerment Award by having day laborers and domestic workers hold discussions.

The meeting between Vozmob and Inquilinos Boricuas en Acción was inspiring to say the least, and it speaks volumes to the possibilities for working towards common goals in our networked age. At the end of the meeting, IBA expressed interest in applying for affiliation to Vozmob, and they have already started using Vojo, which is based on similar VOIP-Drupal technology. To view pictures of the Villa Victoria neighborhood, please follow the links provided below.