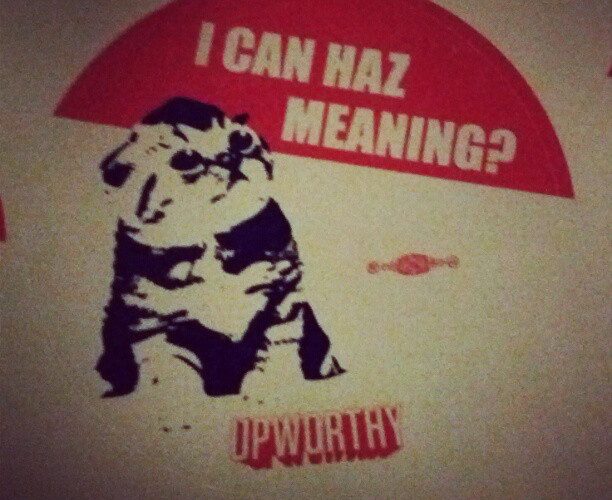 Sara Critchfield and Adam Mordecai‘s talk at Netroots Nation (#nnupFTW) was less-than-standing-room only, so I’ve combined the parts of his talk we were able to catch with a similar talk by their colleague Peter Koechley at the Conversational Marketing Summit. Thanks to Deepa Kunapuli for her notes.

Upworthy’s goal is to amplify content worth spreading online. If you mixed the earnestness of a TED talk with the brevity of a LOLcat and Coca Cola’s distribution network, you’d end up with something like Upworthy’s network of crack content. They don’t necessarily produce the content themselves, they just make sure it goes places. While we debate the impact of technological tactics like SEO and A/B testing on the future of journalism, the Upworthy team is working to harness these new (and always changing) algorithmic tactics for social change.

Peter Koechley (@peterkoechley) thinks about virality as a product of the shareability of the source content and the clickability of the content’s packaging. Everyone who’s spent the last ten years paying consultants to produce viral content will be relieved to know that the latter part of this equation, the clickability of your content’s packaging, is much, much easier to optimize than the content itself. But people don’t spend enough time on this part of the process.

Sara and Adam, Peter’s colleagues at Upworthy, explain that we’re spending all of our content production time in the wrong places. We slave over the wording in the 12th paragraph of the blog post, and then write a throwaway headline that no one ends up clicking. If we care about people finding our content, we need to think generationally, or keep in mind not just our readers, but also what our readers’ friends will see should the gods of the feed place your work before their eyeballs.

Peter walks us through the three schools of headline optimization on the web. Peter started at the Onion, where hilarity depends almost entirely on the headlines. Unfortunately, because the entire joke is contained in the headline, users can get their giggles without actually clicking through to the site. So headlines from the Onion perform rather poorly in terms of driving traffic back to the website.

The second category of headline optimization is your traditional search engine optimization, where the headline contains all of the right keywords, and again, spells out what the page is about. Google loves proper nouns, but humans find them pretty boring.

Social optimization breaks from these two approaches and hits the user with just a taste of the content, worded in a compelling way, and often with an emotional tone. You may have noticed that brands are learning to generate interactions with their Facebook posts by asking for their followers’ opinions, because if they’re successful, Facebook rewards them by increasing the visibility of their posts. But anyone optimizing for click-throughs rather than comments should be considering the degree to which the headline teases and entices the reader while refraining from giving away the meat of the content. Peter calls this the curiosity gap: too vague, and I don’t care, but too specific, and I don’t need to click the link.

Peter shows a case study of two takes on the same 3-minute video about gay marriage. The video of Zach Wahls’s moving testimony about growing up with two moms reached a million views without Upworthy’s help, and without a great headline. The original video was titled “Zach Wahls speaks about family,” which, Peter points out, is bad because you don’t know who Zach is yet, and you might not particularly care about family. Even though it had already gone viral once, the team at Upworthy decided to try spreading the video again with an improved headline. Angie Aker at MoveOn.org came up with “Two Lesbians Raised a Baby And This Is What They Got” and made the video their daily share. The result was 20 million additional views of the same video, and a headline that regularly beats actual porn results for Google searches for “two lesbians”. A good headline teases, but also appeals to different audiences for completely different reasons. Even homophobes were intrigued enough to click that link. Upworthy will sometimes write 25 different headlines for each piece of content, and test response before selecting a finalist.

Greasing the Tracks of the Internet

For someone studying how ideas spread these days, Upworthy’s facilitation is interesting in a number of ways. First of all, Upworthy has taken after the Instagrams of the world and eschewed the traditional website-as-hub model. Where Instagram pushes everyone to their mobile app, the majority of Upworthy’s existence is in followers’ Facebook, Twitter, and Pinterest streams. Upworthy also has some rather prominent share buttons to help you connect the dots:

Adam and Sarah also advised that we spend 55 minutes on emotion for every 5 minutes of fact. And, as cognitive studies have proven, images work much, much better than text. The default image that gets shared with the link on social networks is particularly important (you can control this with Facebook’s og:image tag).

How the Social Networks Stack Up
(for the content Upworthy has tested — your mileage may very well vary):

Twitter: Not great for actually driving people to your content. Facebook accounts for about 90% of the traffic in their tests. (It’s not clear to me if they’re only counting Twitter.com traffic, or all Twitter clients, as well. This divide has historically depressed measures of Twitter referrals). Twitter users like to share facts.
Facebook: If you have a limited budget, focus everything here. Photo posts get three to four times the interaction of regular posts, but don’t necessarily drive traffic. Close-ups of faces perform well, as do visual dichotomies, in ads as well as posts.
Reddit: Good luck. If you crack it, you are a god.
Pinterest: Hey ladies! Pix please.

Adam says you must test because you are dumb. We are all dumb. Our intuition means nothing, and Upworthy’s two biggest headline hits were written by interns. You will be wrong 90% of the time.

Peter will pay you $1,000 to popularize a word that describes these phenomena other than ‘virality’.

Video and slides of Peter’s presentation. Sara and Adam’s slides are pretty great, too:

Upworthy: 10 Ways To Win The Internets