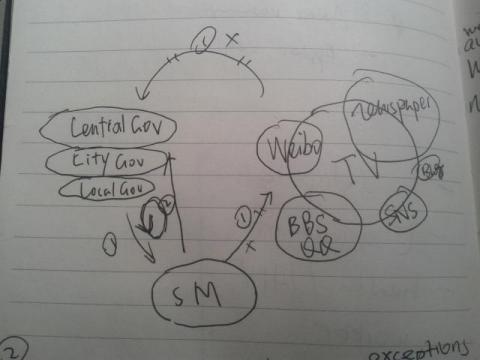 In democratic countries, activists of social movements tend to create adversarial or controversial scenes to attract attention from media and expand their influence in society. This strategy aims to generate pressure from the public to the authority, and thus increase the possibility of success of the movements. However, scholars of Chinese studies find the strategy of resistance in authoritarian countries is not explicitly adversarial. Activists often position themselves in line with the official ideology so as to obtain rightful identity. Based on this discussion, my approach further invites the factor of media ecosystem in discussion. Strategies adopted by activists are inherently mediated by the media environment if they reach out for the support of the public.

I propose that in a complex media ecosystem in China, a more effective strategy of positioning is non-adversarial, if the appeal made by actors is materialistic. If the appeal of the movement is about high politics supported by oppositional ideologies, actors will adopt an adversarial strategy, but the information about this movement cannot flow to mainstream channels of Chinese media ecosystem.

Two cases of resistance will be examined to establish different outcomes of movements with distinctive media strategies. Incidents of land disputes (Wukan) and human rights movements (Ai Weiwei) both are framed as democratic power by international news agencies, but the activists of Wukan consciously cooperated with provincial authority and scaled down the attention from outside. While human rights movements directly challenge the political system as well as the official ideology, so the agenda proposed by this movement is less likely to be found in domestic mainstream sphere, and undermines the opportunities to negotiate with the authority.

This paper will conduct frame analysis across different media platforms on these two cases. For example, tweets from participants in Wukan Incident on a Chinese micro-blogging platform, Weibo, will be scripted, and then we will compare the tweets about Ai Weiwei in Twitter using frame analysis. Not only Tweets, but also news articles, TV reports and other media coverage will be analyzed comparatively.

My hypothesis is that when the resistance of grassroots community in China is more about low politics, they consciously align themselves with the official ideology, but when their claims target at the authoritarian regime as a whole and addressing the values of freedom, their strategy will probably be adversarial and more contentious. Although alignment with official ideology is effective in a short term, the long-term price paid because of this strategy is the lessened possibility of generating democratic discourse.