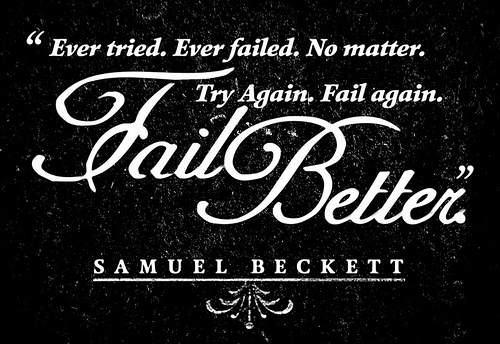 People in the web startup scene celebrate failure with as much gusto as some of us celebrate $2 waffle iron sales. The concepts of failing fast and failing often are already core elements of the lean startup philosophy (to the point of inspiring a contrarian stance).

As I wrote last year,

Twitter itself was an offshoot of a failed podcast service called Odeo. Facebook takes pride in their fails as proof that the company is confronting real challenges. Jimmy Wales gave a TEDx Tampa presentation on his three rather massive failures prior to starting Wikipedia.

At least twenty-five startups have even published candid post-mortems detailing why and how they folded. Individually, these stories can be embarrassing. But collectively, their sharing helps others learn and combat the modern day Horatio Algers with their “22-year old founders getting rich, quickly!” magazine covers.

If you already know this, you can skip ahead. If you’re wondering why failure is a thing to be celebrated, I’ll try to sum it up:

So, the startup world has accepted the gospel that failing is a great way to succeed. But what about non-profits and other social change organizations? They’re notoriously risk-averse, right? Well, last year, we attempted to move the ball up the field.

The New Organizing Institute hosts an epic unconference each year called RootsCamp, in the spirit of Foo Camp. A thousand organizers get together to connect and share what’s working and what isn’t. I designed NOI’s first “Most Valuable Organizer” awards ceremony to celebrate and recognize hard-working organizers, innovative technologies, and inspiring campaigns. It was successful, with lots of online nominations, in-person voting, and well-deserving winners.

The next time around, we decided to iterate and introduce a category for “Most Valuable Fail.” We knew that the political and non-profit arenas we work in are historically risk-averse, especially when it comes to sharing potentially embarrassing information. You’re playing with other people’s money, after all, and foundations don’t always share the adventurous spirit of Silicon Valley startups. You can tell by the disappointing lack of foosball tables.

We created the Experiment category to encourage the spirit of innovation. Without new tactics and innovative strategies, progress is impossible. Sadly, the risk of failure often prevents campaigns and organizations from attempting major innovations or taking real risks. But innovation is at the core of our work, especially as we learn to successfully integrate tried-and-true methods with the new opportunities presented by technological advancement.

But I was still surprised how difficult it was getting organizations to admit even the most obvious failures publicly. Many of the web teams in this space are familliar with the startup world’s embrace of failiure, and in a campaign environment there are obvious hits and misses and plenty of chances to try again. And some of the most honest practioners in the space had broken the ice, with unsolicited fail reports from international climate groups (Part I and II). Despite all of this, we had to manually solicit entries while the other categories took off in a flurry of nominations.

We reached out to friends and colleagues, and changed the prize category from “Most Valuable Fail” to “Most Valuable Experiment,” but otherwise open organizations still remained reluctant. I think that the fear of judgement by others in the industry (reputation) was as big a factor as fear of looking bad to foundations and other funders (resources). Even with a strong body of writing promoting the benefits of failure, and a prize category designed specifically for risk-taking, no one wanted to be in that particular spotlight.

We ended up seven brave nominees; enough to hold a vote. Even then, the “Most Valuable Experiment” acceptance speech began with, “I just want to clarify that we didn’t actually fail…”

So, in some ways, we might have failed at encouraging failure. I have no idea if we had any role in inspiring it, but MobileActive designed and hosted an entire Fail Faire event, and then launched an online home for the idea, complete with tips on how to roll your own Fail Faire.

The World Bank has done just that with three Fail Faires, the most recent of which is Fail Faire DC. They celebrated risk-taking in the international development arena, and appear to have gained some real traction. Expect a similar event in New York City this month.

That being said, you can see for yourself the kind of pushback organizations get for sharing their failures in this comment. The groups are criticized for holding this event and “having fun” at the expense of starving people in Somalia. I’m not singling this comment out; it’s a prime example of the criticism organizations face when they admit that not everything they do works all of the time, or when they try something unprecedented. This kind of negativity is prevalent, and when you hear it from a funder rather than a commenter, it becomes part of the reason social change organizations limit themselves to the safe bets and launch programs that merely hack at the branches of deeply-rooted problems.

To create a safe space for discussion of failure, two of the three World Bank Fail Faires have been internal-only, with promises not to share materials or information online. This defeats the transparency and sector-wide learning benefits of sharing failure, but at an organization as large as the World Bank, is better than nothing.

Michael Trucano wrote up a great behind-the-scenes account of what it’s like to plan an internal Fail Faire, and I wasn’t surprised to see that they, too, had trouble recruiting participants:

We were able to recruit ten brave souls as presenters for our internal FAILfaire…Convincing people even to participate was a rather herculean task.

The Most Valuable Experiment experience piqued my curiosity about what can be done to promote more ambitious experiments and educated risk-taking in social change. When I think about problems like climate change and hunger, my otherwise strong faith in incremental progress crumbles. Is a public, community-voted prize the wrong way to encourage risk-taking? Or do the prizes just need to be bigger than the donated books and documentaries we offered? Are no-strings-attached micro-grants from the Awesome Foundation a better vehicle for risky pilot programs? Would it help to talk more about the risk-taking that goes into successful projects? What can be done to help the big funders understand and promote experimentation? I’d love your thoughts.

For those of you pushing the Fail Better boulder forward in your own organization, here are Lifehacker posts on the topic, some quotes for inspiration, and How to Talk About Failure Without Getting Fired.